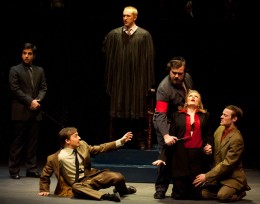 Wright State’s “The Merchant of Venice”  takes adds a new twist by setting the action in modern-day Italy.

Greed, revenge, passion and jealousy abound at the Wright State theatre department’s production of William Shakespeare’s The Merchant of Venice.

Directed by associate theatre professor Sandra Crews, this classic play tells the story of a wealthy merchant, three pairs of lovers and a moneylender bent on vengeance.

“It takes place in Venice at the time when Jewish ghettos were prevalent throughout Europe,” said Crews. “It looks at the idea of marginalizing a group of people and what happens when they get a chance to get back at the people who have been mistreating them for years and years.”

“So the question becomes, do you avenge yourself in some terrible way or do you have mercy on the people who haven’t had mercy on you?” she said.

The Wright State production takes a new turn by setting the action in modern-day Italy. Crews said that while all of Shakespeare’s plays are relevant today, Merchant especially speaks to contemporary audience because discrimination happens all over the world.

“This show has really taught me that how you treat people is important,” said senior acting major Tess Talbot. “You have to watch how you behave towards others not just outwardly in what you say and do, but also inwardly in what you think about them.”

Talbot is part of the other big twist Wright State has built into this production. She plays Antonia, a female version of the male Antonio character.

“I think gender-bending the role is a brilliant idea,” said Talbot. “Not only does it add more female roles to Shakespeare’s plays because there aren’t many of them, but also adds to the complexity of the story.  It allows the relationship between Antionio and Bassanio to flesh itself out more, making it much more of a love triangle with Portia.”

Sophomore acting major Andrew Quiett has taken on the show’s most challenging and iconic role: Shylock, a Jewish moneylender out to get a “pound of flesh” from those who have persecuted him for his religious beliefs. Shylock’s “hath not a Jew eyes” speech in Act Three, a stirring condemnation of prejudice and racism, is one of Shakespeare’s most quoted monologues.

The role of Shylock has been played by many notable actors, including Lawrence Olivier and Patrick Stewart. Most recently, Al Pacino tackled the part in both a New York stage production and a Hollywood film adaptation.

Despite the show’s heavy themes, it is considered one of Shakespeare’s comedies.

“Nobody dies at the end, which makes it a comedy,” said Crews. “But actually, the show is quite funny.”