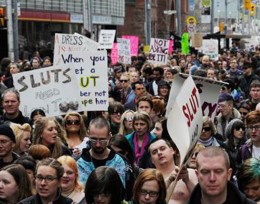 The keynote lecture of the 2012 Race, Class, Gender, Sexuality Symposium will address the racial implications of the SlutWalks movement.

In cities across America, victims of sexual crimes and their supporters have organized marches against sexual violence. Called “slutwalks,” these marches seek to change the perception that victims of sexual violence are somehow responsible, either by their dress or their actions, for what happens to them. The movement emphasizes that blame should be placed solely on the attackers and not the victims.

“SlutWalks and SisterTalk,” the keynote lecture of the 2012 Race, Class, Gender, Sexuality Symposium, will address some of the racial implications of the SlutWalks movement. From the history of pro-sex feminism to dominant stereotypes about women’s sexuality, the lecture will discuss whether or not black feminist theory has failed to keep up with the feminist ideas of sexual empowerment and liberation.

Kimberly Springer, Ph.D., will deliver the keynote lecture. Springer is an associate professor of women’s, gender and sexuality studies at The Ohio State University. She has written extensively on gender, race, sexuality and digital culture for academic and popular press outlets.

The theme for this year’s symposium is “Critiquing Culture, Working for Change.” This all-day event will be held on Friday, Feb. 24, and will feature more than 50 presenters from seven universities.

Breakout sessions will take many forms, from roundtables to workshops to academic presentations. They will cover a wide variety of topics including history, religion, activism, masculinity, sexuality, politics and sociology.

“It’s a really varied agenda,” said Vlasnik. “I guarantee there will be something for everyone.”

Some of the sessions will focus on pop culture, discussing the reality television programs The Millionaire Matchmaker and Sister Wives.

Wright State students Kristen Coppess and Emma Zelik will present their research “How Catwoman’s Body Destroyed Society: The Banning of the Female Body in Comics” and “Feminist Subversion in The Twilight Zone,” respectively.

One session will discuss sexuality in pornography. Attendees are advised that explicit images will be shown for discussion purposes. Other sessions will explore issues that face transgender persons with disabilities and multicultural women in higher education.

A full schedule of the day’s presentations can be found at http://www.wright.edu/women.

The symposium will be held in the Wright State Student Union from 8:30 a.m. to 3:50 p.m. The event is free and open to the public. No registration is required. The symposium will include a break for lunch, though lunch will not be provided.