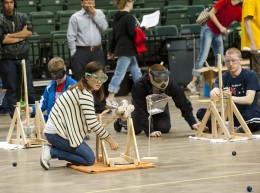 Yeon Yu of Carroll High School sets up her trebuchet at the competition.

Wright State held its 12th annual Trebuchet Competition today for high school teams from around Ohio. More than 200 students from 36 teams converged on the Wright State University Nutter Center to set up miniature hurling machines that they designed and built in classroom projects that applied engineering, problem-solving and team-building skills.

Organized by Wright State’s College of Engineering and Computer Science, the Trebuchet Competition is inspired by medieval machines that launched large projectiles into enemy fortifications. The students only fired squash balls, but their machines worked like the originals, using counterweights and gravity to rotate an arm with a sling that hurls the projectile.

The battles are fun, but they are actually “a lure for all of the education that went on before this,” said competition director Joseph C. Slater, Ph.D., associate dean and professor of mechanical and materials engineering.

“Before this event, they spent months investigating trebuchets and working to design them. The competition rules make it very difficult. They cannot build them from a kit,” Slater said.

“Gabby Carter, a senior at Carroll High School in Dayton who aspires to be an engineer, called the project “very challenging and time consuming. It was hard to get started. I’d never built anything like this before.” But Carter, who was on one of three teams Carroll sent to the competition, also said it was “very fun. I love this kind of stuff.”

The teams battled each other in a series of matches. The object for each team was to attempt to hit one of several plastic targets near the other team’s trebuchet.

Learn more about the Trebuchet Competition at www.cs.wright.edu/trebuchet