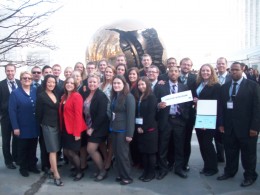 Wright State represented the United Kingdom. The team studied the U.K.’s foreign policy thoroughly before the trip and used that information to give speeches, write resolutions and write position papers during the conference.

This year, Wright State represented the United Kingdom. The team studied the U.K.’s foreign policy thoroughly before the trip and used that information to give speeches, write resolutions and write position papers during the conference. The team also visited the U.K. Mission to the United Nations. 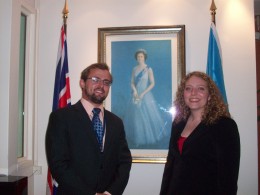 Wright State’s head delegates for the 2012 team, Jacquelyn Schroeder and Matthew Conaway, led the preparation on campus as well as Wright State’s team at the conference.

“We got the Outstanding Delegation award again, which means we worked well in committee, we knew our country’s policy, and above all else we were active and effective contributors,” said Schroeder.

Students represent their designated country and produce resolutions by working with students from other teams in committee. They try to get consensus, but different state policies conflict.

“We had to represent the U.K. policy as best we could and interact with others with it in mind at all times,” said Schroeder. “It’s really a game of negotiation and compromise.”

Students say the experience is invaluable because they learn to think from another country’s perspective. The process of learning that country’s position on global issues teaches tools that serve students well beyond the classroom.

“The program engages students in intense preparation for the conference, focusing on public speaking, negotiation, research and writing legislation and treaties,” said Schlagheck.

Schroeder, who has participated in five Model UN conferences, says her experience as head delegate in this, her final year, is bittersweet.

“It’s been my life the last five years, I guess you could say,” Schroeder said. “I’m really proud of the team and the work that they’ve done, definitely. I’m so pleased with all of our results.”