When it comes to the speed of processors that power our computers, the needle is stuck. A speed limit of sorts has been reached in processing data and turning it into text, images and video streaming.

Lok Lew Yan Voon, Ph.D., chair of the physics department at Wright State’s College of Science and Mathematics, says there was a time when the computer speed was going “up and up and up and up.” 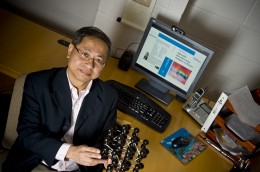 In 2007, Lew Yan Voon and student researcher Gian Guzmán-Verri wrote a paper identifying the possibility of creating a new substance. They called it “silicene.”

“But in current computer electronics—CPUs—the speed has been basically stuck at 3.2 gigahertz for the last decade or so,” he said. “They might discover some other processes to make it faster. But it seems like it’s plateaued.” A faster computer would be invaluable in such areas as weather forecasting, where massive amounts of data must be analyzed quickly.

To develop a faster transistor, a new material other than silicon is probably needed. In 2004, researchers discovered graphene, a single sheet of atoms that held out the promise of making transistors as much as 1,000 times faster.

However, because the current transistor industry is silicon-based, it could take up to 20 years to change existing manufacturing processes and commercialize graphene. In addition, graphene may lack the property to turn an electric current on and off, an essential quality for a transistor.

In 2007, Lew Yan Voon and student researcher Gian Guzmán-Verri wrote a paper identifying the possibility of creating a new substance. They called it “silicene.”

“The primary thing we did was demonstrate that if such a material could exist, it would have certain special properties,” said Lew Yan Voon.

The idea was to replace the carbon atoms in graphene with silicon atoms. Instead of a single sheet of atoms, silicene would have an up-and-down atomic configuration and would be able to turn an electric current on and off.

“We proved that it could have those same properties as graphene, even when the atoms go up and down,” Lew Yan Voon said. “We are now working on calculations to try to prove that we can turn it on and off.”

Lew Yan Voon grew up on Mauritius, a small tropical island in the Indian Ocean southeast of Africa. He obtained his bachelor’s degree at Cambridge University, his master’s at the University of British Columbia, and his doctorate at Worcester Polytechnic Institute in Massachusetts.

Lew Yan Voon did post-doctoral work in semiconductors at the Max Planck Institute in Germany. He came to Wright State, in part because of faculty members who were well recognized for their expertise in semiconductors.

Several groups of researchers have recently claimed to have successfully created silicene. As a result of these reports and his expertise, Lew Yan Voon has been interviewed by national news organizations.

“The bottom line is there are more and more groups coming out and saying they’ve made it,” he said. “The study of silicene is looking more and more promising.”