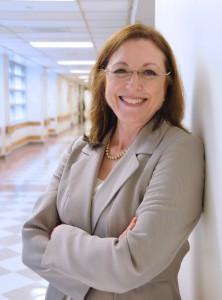 Marjorie Bowman, M.D., M.P.A., professor and founding chair of the University of Pennsylvania’s Department of Family Medicine and Community Health, has been named Dean of the Wright State University Boonshoft School of Medicine.

Bowman will succeed Howard Part, M.D., who is stepping down after 14 years as Dean to resume his teaching career as a full-time faculty member in the medical school.

Bowman is director of the University of Pennsylvania’s Center of Public Health Initiatives, whose mission is to improve health and quality of life by expanding and strengthening public health education, research and practice, to promote community/academic partnerships, and serve as the academic base for Penn’s Master in Public Health degree program.

“Marjorie Bowman was selected from a strong pool of highly qualified candidates,” said Wright State President David R. Hopkins, who thanked the search committee for its work.  He added, “She will bring outstanding experience to the Boonshoft School of Medicine in many areas, one of which is her significant interest and work in the area of health care community partnerships. She’s an excellent choice to succeed Dr. Howard Part, whose vision and leadership have served our larger community so well.  Under his guidance, the Boonshoft School of Medicine has grown in stature and significance.  While we thank him for his excellent work, we must also thank his family for the sacrifices they made to help him be such an effective dean.”

Since arriving at Penn as the first woman chair of a clinical department in the School of Medicine and as a founder of the Department of Family Medicine and Community Health, Bowman has led the department to one with over 45,000 outpatient visits in two offices in West Philadelphia and 1,400 hospital admissions while championing education and research in family, preventive and community medicine within the university.

“I was attracted to Boonshoft because it is a school truly birthed of and for its community. The school has benefited immensely from excellent leadership which has created a forward thinking collaborative for superior health care and for highly creative research while maintaining an educational model that is emulated nationally,” said Dr. Bowman.  “Such a magnificent spirit of both innovation and inquiry will serve the school well into the future, and I am honored to take the helm at such an exciting time in Boonshoft’s history. “

In addition to her medical degree, Bowman has a master’s degree in public administration. She previously worked for the U.S. Department of Health and Human Services in health policy work and was a commissioned officer in the U.S. Public Health Services. She is dual board-certified in family medicine and public health and general preventive medicine.

She was named a “Top Doctor” by U.S. News and World Report in 2011 and placed on the “Best Doctors List in America” for 2011 by Best Doctors Inc.

Bowman has written several books, including Stress and Women Physicians and Office Emergencies. She has also served as editor of the Yearbook of Family Practice.

In addition, Bowman has been a reviewer for such publications as the Journal of Women’s Health, The Primary Care Companion to the Journal of Clinical Psychiatry, and the Journal of the American Board of Family Medicine. She has written journal articles on topics ranging from family medicine to cancer, obesity, neurology and radiology. One notable article was titled “The impact of drug company funding on the content of continuing medical education.”

Bowman obtained her bachelor’s degree from Penn State University, her medical degree from Jefferson Medical College, and her master’s in public administration from the University of Southern California.

Her tenure at the Wright State Boonshoft School of Medicine will begin Oct. 1.