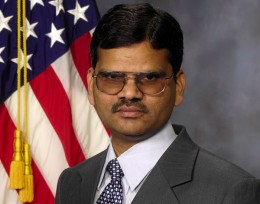 One of seven scientists and engineers receiving the Air Force Research Laboratory’s highest honor this year has ties to Wright State University’s Boonshoft School of Medicine.

AFRL last week announced its 2012 AFRL Fellows, the organization’s most prestigious honor for its nationwide scientific workforce.  Among the honorees are Saber Hussain, Ph.D., a senior toxicologist with AFRL’s 711th Human Performance Wing at Wright-Patterson Air Force Base.

Hussain is also an associate professor in Wright State’s Department of Pharmacology and Toxicology.

“This is AFRL’s top award, given to those who’ve shown superior research and development expertise during their years in the lab. It’s an incredible honor,” Jennifer Ricklin, Ph.D., AFRL’s chief technologist and overseer of the Fellows program, said in a prepared statement.

Besides formal recognition, the Fellows award brings with it $150,000 per year for two years in additional research funding.

The award announcement described Hussain as a leader in the emerging fields of nanobioeffects and nanotoxicology. He developed a state-of-the-art nanocharacterization laboratory for toxicology studies, the first of its kind within the Department of Defense.

AFRL said the lab addresses the knowledge gap in the human and environmental health implications of nanomaterials.

AFRL is the Air Force’s center of science and technology, responsible for $2 billion in Air Force research and an additional $1.7 billion from customers such as other federal agencies. AFRL has its headquarters and several research directorates at Wright-Patterson.

The 2012 AFRL Fellows will be honored in September at an annual Fellows Banquet.