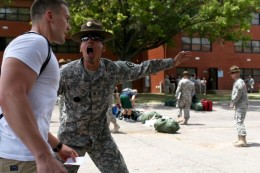 Wright State ROTC student Derek Oda (left) is instructed by a drill sergeant during his first day at the Leader’s Training Course.

On the front lines of battle, trying to steer a platoon of young soldiers on hazardous terrain while dodging whizzing bullets can create a terror that could make mice of many men. The ability to lead in times of pressure is a fundamental characteristic of a good military officer—and that is exactly what the Leader’s Training Course instills in its ROTC cadets.

Derek Oda and Brian Bolibrzuch were two of the three Wright State ROTC students who attended the Leader’s Training Course. Oda, a psychology major, and Bolibrzuch, a biological science major, both have high military aspirations. Each is confident that the Leader’s Training Course (LTC) provided them with the leadership experience and knowledge it will take to achieve the career of their dreams.

The Leader’s Training Course is an intensive four-week introduction to Army life held at Fort Knox in Kentucky. There are seven courses during the summer, each lasting four weeks. The course helps ROTC cadets develop the necessary leadership abilities they will ultimately need to be effective Army officers.

Unlike most military training courses, the LTC molds the cadets’ minds more than their bodies. “I trained hard before I left only to find out that we would be doing minimal physical training,” said Oda. “The course was more of a mental game as far as overcoming fears and stepping outside your comfort zone.” 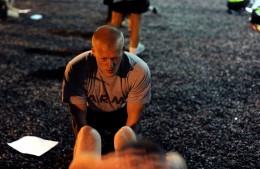 Under the tutelage of drill sergeants, ROTC cadets spent their first few days at the course learning the basics of the Army. The course started with basic drill and ceremonies, customs and courtesies—getting the cadets used to the Army way.

Then, cadets were divided into squads for the Teamwork Development Course. In order for the squads to successfully complete each assigned task, obstacle course or simulated combat scenario, a vigilant cadet had to take on the role of a leader.

“We were put in leadership positions often throughout the 29 days of training,” said Oda. “When tasked with certain challenges and missions, it’s critical to think quickly and effectively.”

As the training exercises grew more physically and mentally demanding, so did the responsibilities of the leaders. However, throughout the LTC, every cadet was given the opportunity to both lead and follow.

“The specific experience I valued the most was actually when I wasn’t a leader,” said Bolibrzuch. “This allowed me to see how other people led, and in turn I was able to put their positive leadership traits with mine and make a better leader.”

In addition to fostering leadership, the LTC pushed the cadets to conquer their fears. Atop a 31-foot rappel tower, cadets had to disregard their fear of heights for the sake of completing the training event. They learned how to properly climb, utilizing military techniques that ensured the safety of themselves and fellow cadets.

Height wasn’t the only fear cadets had to overcome: in their Combat Water Survival Training, cadets jumped three meters into a pool while blindfolded and with their rifle held overhead.

After four grueling weeks of training exercises, cadets graduated from the LTC having met the high standards to qualify for the Senior ROTC program. Upon their graduation, cadets also received college tuition assistance.

“There is still a lot left to learn, but the Leader’s Training Course put me in a position to succeed in the Army ROTC program,” said Bolibrzuch. “As for my desired career, no matter what branch I end up in, as an officer I will have to be able to lead, and that is exactly what LTC prepared me to do.”