The Wright State University fossil sleuth is scheduled to appear on an upcoming episode of the Discovery Channel’s popular Shark Week TV series. But the star of the show will be a full-size model of a gigantic ancient shark with a bone-crunching jaw that Ciampaglio helped create. 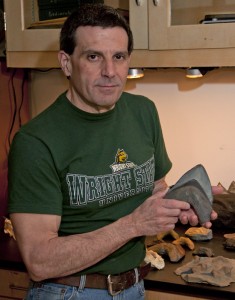 Ciampaglio, a doctor of paleontology, is associate professor of earth and environmental sciences on Wright State’s Lake Campus in west central Ohio. He’s among a handful of scientists worldwide who has studied megalodon, the prehistoric shark that’s the subject of the upcoming episode. The Discovery Channel filmed Ciampaglio extensively for the program this spring.

No megalodons lurk off the shores of Lake Campus in Grand Lake St. Marys. This fish ruled the oceans between 12 million and 2 million years ago, Ciampaglio said. But his lab is well stocked with megalodon teeth that he and his students have unearthed in locations around the country.

Megalodon was a true monster. Next to it, the modern great white shark would be a runt. A full-grown megalodon could be as big as a semi truck, with teeth the size of your hand and a mouth big enough to swallow a small boat—skipper included. 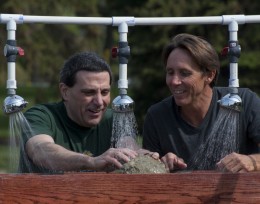 “This is one of the largest carnivores that ever lived. Estimates of its size range from 50 to 75 feet long for a grown female,” Ciampaglio said.

This isn’t the first time a TV program has sought out Ciampaglio’s expertise. In 2009, the National Geographic Channel brought a small replica of a megalodon’s jaw to his lab for an episode of Prehistoric Predators.

“It actually bit into large blocks of hardened red Jell-O to show the bite force, the biting technique, and what kind of wounds it would have made,” Ciampaglio said.

The Discovery Channel film crews spent a lot more time with him, he said. One crew came to his lab April 30 for a long day of filming. He spent four days in May with another crew at Sharktooth Hill, a fossil bed he frequents near Bakersfield, Calif. 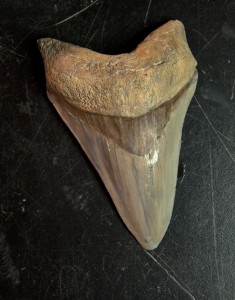 This cast of a tooth of the prehistoric shark megalodon is as big as a hand.

He also visited Technifex Inc. in Valencia, the company that built the monster megalodon choppers.

The lifelike mechanical jaw is made of cast iron and steel. A hydraulic power system gives it an authentic bite. A key contribution Ciampaglio made was helping Technifex set the teeth accurately. It only included two rows of teeth, but Ciampaglio said that was enough to achieve a realistic effect. “They’re going to be capable of doing basically what that shark could have done,” he said.

Some people got a sneak preview of the mechanical megalodon in June, when Technifex mounted the jaw in a full-size plastic shark body, dubbed it Sharkzilla and hauled it on a flatbed truck to Ventura Beach for a session of biting demonstrations. It munched whatever people brought—amateur videos on YouTube show it chomping a small boat, a jet ski and a full beer keg.

Sharkzilla’s appearance is speculative, though. Ciampaglio said nobody knows exactly what a megalodon looked like—the fossil record only includes teeth, jaws and vertebrae. 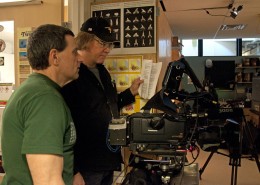 But prehistoric shark’s teeth tell a lot about natural history, Ciampaglio said. “Teeth are the business end of any vertebrate, and nowhere in the animal kingdom will you find a greater range of tooth designs” than in sharks, he said.  Since they’ve been around for some 400 million years, “They contain the record of life on earth through their form and function.”

“My graduate students are always involved, but I involve my undergraduates, too,” Ciampaglio said. “In fact, two of my undergraduates just had a peer-reviewed paper published and presented at a national meeting.”

Ciampaglio said he hopes the Shark Week episode will make more people aware of the research opportunities for students at Lake Campus.

“I think it shows that we’re very active in research,” he said. “As you walk through here and see what’s going on, you see students working in the lab and you see that this is a very active campus, and an integral part of the university.”

Visit www.wright.edu/sharkwk12 for preview videos of the episode.

Visit www.wright.edu/lake to learn more about the Lake Campus.