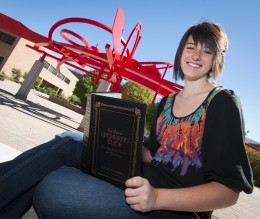 Wright State sophomore Elise Hartzell is on her path to becoming a future English professor.

When 17-year-old Elise Hartzell was making pizzas or running the register at the Morning Star Convenience Store in the tiny northwest Ohio village of Melrose, she daydreamed of becoming a college English professor.

At the time, the dream seemed very far away.

Hartzell’s father—a tool-and-die maker who had worked the third shift for 12 years—had died earlier that year.

Her mother, a hairdresser, was struggling to pay the bills and support Elise and her two younger sisters.

“She only makes about $10 per person because the area is so poor nobody can afford any more than that,” Hartzell said.

Even though she was a straight-A student, Hartzell knew that her college dream would hinge on her ability to pay for it. So she gave up a spot in the band at Paulding High School to work at the Morning Star in Melrose, a mile from her home in Oakwood.

“I had to work there as much as I could,” she said. “And as soon as I got the job, I started putting money away.”

Hartzell only allowed herself about $40 a week in spending money.

“It taught me a lot of responsibility,” she said.

With her bankroll slowly growing and her grades sparkling, the only missing piece was a college acceptance. Hartzell had applied to The Ohio State University, but had not heard back. She was growing increasingly nervous.

A friend suggested she apply to Wright State. Within two weeks, Hartzell had not only been accepted at Wright State for last year’s fall quarter, but was being offered a $10,000 scholarship.

“I was surprised. I was overjoyed,” Hartzell said. “I didn’t even come and look. I just figured the way they were acting, it was the place for me.”

But coming to a university from the small, rural village of Oakwood took a little adjusting.

“It was rough when I first moved here,” Hartzell said. “I was more of a quiet person, so I didn’t really go out and do all of the social stuff. But it got better as time went on. I just had to learn adapt to different personalities and different friends.”

Hartzell, now 19, hasn’t broken her straight-A habit. After her first year at Wright State, she has a 4.0 GPA.

She is currently working two jobs—a summer job at the Morning Star and a job at Wright State’s Student Conduct office. Juggling the two requires shuttling from Oakwood to Dayton and back—a two-hour commute.

Hartzell is also gearing up for fall classes, which will include a course in British literature.

“I like reading classic literature because I think it takes a lot of thought process,” she said. “I think it’s important that when you read something you’re actually analyzing it.”

One of her favorites is Lord of the Flies, a novel by Nobel Prize-winning English author William Golding about boys stranded on a desert island who try to govern themselves. But she also occasionally reads for fun. She brandished The Hitchhiker’s Guide to the Galaxy during a recent interview.

“I decided that English is my calling,” she said. “I’m not good at a lot of things, but that’s something I’m good at.”

And the small-town girl is getting comfortable at Wright State.

“I’m glad I came here,” she said. “I see so many familiar faces. We’re our own little small town.”