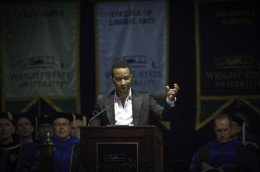 Legend challenged students to find their passion and make a difference in the world, asking them to “figure out what you believe in and then advocate for it.”

“I remember what it was like to be in your shoes,” said Legend, speaking at the university’s Freshman Convocation and assuring the Class of 2016 that it’s OK to be both excited and nervous.

As the event’s keynote speaker, Legend spoke about the challenges faced by the United States in the world of education. He cited the statistic that 50 percent of high school dropouts come from just 15 percent of schools, most of them located in the communities most in need of what he called “the transformative impact of education.”

“Education gives you control of your own destiny,” he said. “You will be equipped and empowered with the tools you need to succeed in life.”

Legend also challenged the students to find their passion and make a difference in the world, asking them to “figure out what you believe in and then advocate for it.” 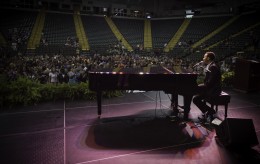 After his keynote address, Legend took questions from the audience and performed three songs.

Wright State President David R. Hopkins also welcomed the university’s newest Raiders: “I look forward to shaking your hands at your graduation because when you get to that moment, you will have achieved something great.”

More than 3,600 students will begin their higher education at Wright State this fall; more than 2,400 of them are coming directly from high school.

“Each one of you comes with a dream—and if you don’t have one, get one!” said Hopkins. “Wright State is dedicated to making you as successful as you want to be.”