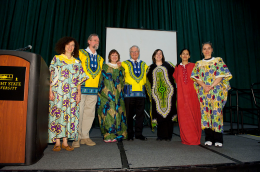 A moment from the 2011 French Immersion Day–Wright State President David R. Hopkins is joined on stage by French professors and other individuals from the Department of Modern Languages wearing appropriate ethnic garb.

High school and college students from schools all over Ohio will visit Wright State to sharpen their bilingualism in coming weeks. Wright State will play host to both the French and Spanish Immersion Days.

On Wednesday, Oct. 31, Spanish Immersion Day will bring students together in celebration of El Día de los Muertos or Day of the Dead. Celebrated by many across the globe, Day of the Dead is a Mexican holiday that pays homage to deceased loved ones.

“The students that will attend have signed a contract to speak only in Spanish,” said Michelle Cipriano, lecturer of Spanish and coordinator for Spanish Immersion Day. “We expect them to learn new vocabulary, important points about Spanish and Latin American cultures and the importance of speaking another language in the 21st century.”

Crafts, Latin dances, Spanish trivia and grammar-based games are only a few of the cultural activities offered as a part of Spanish Immersion Day. The event will place from 9:30 a.m. to 2 p.m. in the Apollo Room and the rooms nearby. According to Cipriano, over 100 students from seven different schools will be in attendance. 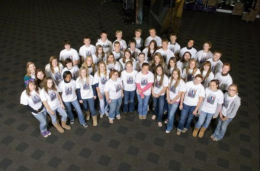 High School students pose for a group photo in the Wright State Student Union during the 2010 Immersion Day.

“For many of these students, it is their first time on a college campus, so we believe this is an excellent opportunity to promote Wright State and all that the university and the Department of Modern Languages has to offer,” she said.

On the following Wednesday, Nov. 7, French Immersion Day will focus on Canada with the theme “Le Canada Francophone: Pays des Merveilles,” which translates to “Canada: A Wonderland” in English.

“The number one way to learn a language is to be immersed in it,” said Topher Crosby, Wright State student and committee chair for French Immersion Day.

“Just like learning anything else, the student must get the ‘hands-on’ experience in order to really understand it,” he said.

The event will also be held in the Apollo Room and the surrounding rooms from 9:30 a.m. to 2 p.m.

“Many of the French classes at Wright State are working to create different activities to be done throughout the day,” said Crosby. “A personal favorite activity is a music presentation by Dr. Kirsten Halling. The students will also be given a catered lunch based on Canadian culture.”