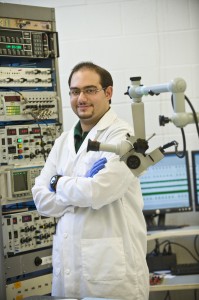 Ahmed Obeidat – who obtained his M.D. at The Jordan University of Science and Technology – is pursuing his Ph.D. at Wright State University in neurophysiology and is among the research stars at the university’s Neuroscience Institute.

There must be something in the olive oil.

Growing up, the Obeidat children helped pick and process olives from trees at their home in Jordan, a few miles from the capital of Amman. They enjoyed the cloudy, richly flavored oil and shared it with their relatives.

The Obeidat family also shared the value of higher education.

Today, two of the children attend The Jordan University of Science and Technology , considered a premier university for medicine and engineering in Jordan. A third is in Colorado, working on his Ph.D. in computer science.

And Ahmed Obeidat – who obtained his M.D. at The Jordan University of Science and Technology – is pursuing his Ph.D. at Wright State University in neurophysiology and is among the research stars at the university’s Neuroscience Institute.

Obeidat is studying a spinal cord circuit involved in controlling body movement. His goal is to increase or restore movement to victims who suffer paralysis from combat, traffic accidents or other trauma by chemically manipulating the smaller circuits in the spinal cord.

“We are so excited. We are very close to discovering the function of that circuit,” Obeidat said. “It will change the ways people are thinking about this circuit.”

“We’ve had considerable success in this arena, getting grants and publishing papers,” said Timothy Cope, Ph.D., the Brage Golding Distinguished Professor of Research and director of the institute. “We can take our strength in basic neuroscience and use that to build up the neurological world and form a synergistic alliance.”

Institute research will be housed in the new Neuroscience and Engineering Collaboration building, with construction expected to begin this winter. The $37 million facility will house 125 people, including researchers in the $22 million neuroscience research center the university is creating in partnership with Premier Health Partners.

Obeidat is both a neurologist and neuroscientist, someone who can see patients while also trying to solve their problems in the lab.

“What I like about the new building is the collaborative thing,” Obeidat said. “It will contain neuroscientists, neurologists and neuroengineers — three different disciplines coming together to solve some similar problems.”

After obtaining his M.D. from The Jordan University of Science and Technology , Obeidat practiced medicine for a year. Then his passion for research prompted him to pursue a graduate degree in neurophysiology. The chairman of that department at the university in Jordan recommended Wright State.

“I had never heard of Wright State before,” Obeidat said. “But the chairman said he had visited their labs, and it is the perfect place for neurophysiology.’’

Obeidat, who arrived at Wright State in 2009, said the university has created a terrific environment, one that offers personal attention and partners for projects.

Obeidat’s project is to try to better understand the Renshaw cell, which affects body movement by regulating the motor neurons in the spinal circuit. The outcome of the research could provide important insight into movement disorders caused by nerve injury.

“If we know what the deficits in the circuit are, we can probably manipulate those and recover function,” Obeidat said.

Obeidat and his wife, Nadia, have two young sons. They reside in Fairborn.