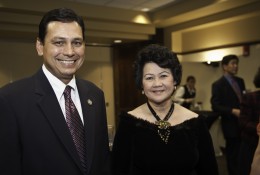 Since its inception in 1997, the Asian/Hispanic/Native American Center (AHNA) has played an integral role in providing Wright State and the Dayton community with academic, social and cultural service.

On Oct. 23, AHNA commemorated its 15th anniversary with a celebratory dinner that recognized those who have helped make the center what it is today.

“The event provided us with an opportunity to thank the faculty, staff, students and community members who have been traveling with us in this journey for the past 15 years,” said Mai Nguyen, director of AHNA. “They have provided us with immense support.”

The center presented 15th Anniversary Appreciation Awards to those who have fostered students’ academic success, leadership development, and addressed their social and cultural needs.

Nguyen said she is very thankful for the staff, faculty and students who have generously given their time, ideas and support to the center. 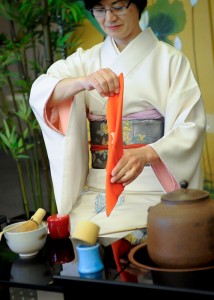 Sharing traditions from cultures like those in Japan have been an important part of AHNA’s message for the last 15 years.

“At AHNA, we are proud of the academic support and resources we provide for students,” said Nguyen. “We help students study, learn and also connect with their professors or other students that can help.”

“I saw where AHNA has come from and where we are going,” she said. “As a student, it’s really important for me to be a part of AHNA and to provide for other students.”

Miranda said AHNA has helped her collegiate career in numerous ways. Not only has Miranda gained invaluable leadership skills in her position as AHNA Council president, but she has impacted many other Wright State students.

“We make sure students have academic success, cultural awareness and stronger sense of leadership,” she said.

On Oct. 25, AHNA will join other student organizations in sponsoring Wright State’s annual Multicultural Halloween Celebration. Attendees are given the opportunity to learn about the fall holidays observed by countries all over the world.

The event’s activities consist of multicultural music and dance, ethnic foods and costumes, and games and contests. Attendees are encouraged to come in Halloween costumes.

The Multicultural Halloween Celebration will be held from 5:30 to 9 p.m. in the Student Union Apollo Room.

This dance performance was a show stopper duing AHNA’s Asian Culture night in 2011.

Fashion is a big part of culture. AHNA has shared countless international fashions with the Wright State community including this example from Vietnam.

Sharing traditions from cultures like those in Japan have been an important part of AHNA’s message for the last 15 years.

A performer from Asian Culture Night 2011.