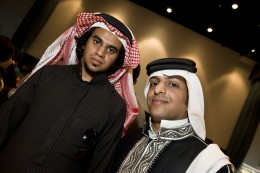 In a globalized society, an understanding of other languages, cultures and customs is an invaluable stepping stone for success in all fields. For universities across the globe, the emphasis on international education has grown.

International education is a high priority at Wright State, which has bridged linguistic and cultural divides across the board. For the 2012–13 academic year, a surge of international students has come to Wright State’s campus in search of a quality American education. 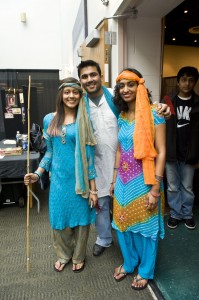 Indian students pose for a picture at the 2011 International Friendship Affair.

Almost half of international undergraduate students are enrolled in the College of Engineering and Computer Science. In just four years, international enrollment in this college has grown from 19 to 269.

As Wright State’s associate vice president for international affairs, Foster has witnessed the university’s international student population flourish over the years. He believes that each of these students play an integral role in diversifying the campus.

“International students bring to our region a new perspective,” said Foster. “They share their experiences of a much different part of the world and culture.”

“We have partnerships with a number of universities in different countries,” said Foster. “Through these partnerships and collaborations, Wright State participates in a degree completion program. This means international undergraduates and graduates can start college in their home country and finish their degree at Wright State.”

According to Foster, there is an economic dimension to bringing international students to the area: more tuition paves the way for Wright State’s future advancement and development. 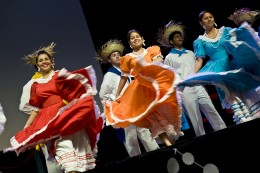 Sharing culturally accurate dances, songs and celebrations is an important part of the International Friendship Affair.

Similarly, when more people come to the Dayton region, the local economy receives a boost. Foster said international students are attracted to the area for a number of reasons. “We’re in a lower-cost part of the country, and the Midwest is a friendly, laid-back region,” he said.

In fact, when Wright State receives more international students, campus experiences a wave of culture and more opportunities for academic success and innovation, as well as extra tuition.

“Whether or not they stay in the United States after they graduate, both Wright State and the student will have benefitted,” he said.

Because Wright State understands the difficulties that come with assimilating into a new culture, students, faculty and staff have gone above and beyond to accommodate each and every foreign student. 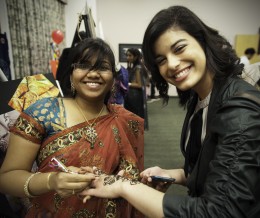 Indian students share their native henna tattoo art with other students each year at the International Friendship Affair.

Wright State has an intensive English program, known as Learning English for Academic and Professional Purposes (LEAP) that familiarizes foreign students with the American classroom.

“It bridges to our many strong academic programs,” said Michelle Streeter-Ferrari. “LEAP helps transitions foreign students into the classroom.”

Streeter-Ferrari serves as the director of the University Center for International Education. Like Foster, she advocates immersion as the most effective way to learn a new language and to understand new cultures; this is why she encourages student to travel.

“One percent of college students study abroad. To have foreign students in the classroom with a unique perspective is important for all Wright State students,” she said.

Streeter-Ferrari also said that an international presence on Wright State’s campus occasionally inspires students to travel so they themselves become a foreign exchange student elsewhere.

“Students are curious,” said Streeter-Ferrari. “We had record numbers at our Study Abroad Fair in September. We know there’s an interest because students are starting to see the importance of gaining an international perspective.”