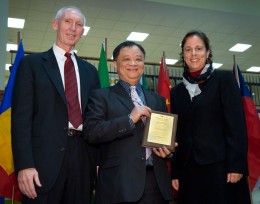 For his tireless efforts to expose the Wright State community to global cultures and research, George Huang, Ph.D., is this year’s recipient of the university’s International Education Award.

The International Education Award is designed to recognize the successful efforts of members of the Wright State community in expanding global awareness and international understanding on campus and in the surrounding communities. It highlights innovations in curriculum development, the operation of study abroad activities and the provision of services to students and scholars.

Huang joined Wright State in 2006 as a professor and the chair of the Department of Mechanical and Materials Engineering. He also spearheaded the research and development of micro air vehicles, serving as the founding director of Wright State’s Ohio Center of Excellence in Micro Air Vehicle Research.

Huang has been a vital force in globalizing the university’s curriculum, especially within the College of Engineering and Computer Science.

He initiated the International Industrial/Academic Leadership Experience Ambassador Program, a three-week program that has been conducted every summer since 2007. This program, in close collaboration with Chung Yuan Christian University in Taiwan, has hosted students from three colleges at Wright State: the College of Engineering and Computer Science, the Raj Soin College of Business and the College of Liberal Arts.

He was also crucial to the establishment of the Center for High Performance Computing, a joint collaboration between Wright State and Cradle, a Japanese computational fluid dynamics firm.  The center has provided numerous opportunities for undergraduate and graduate students to conduct cutting-edge research and to be exposed to Japanese culture and business practices.

“When I was planning my research time in the Taiwan, Dr. Huang encouraged me to pursue some of his contacts in Taipei,” said Laura Luehrmann, Ph.D., political science associate professor and director of Wright State’s master’s program in International and Comparative Politics. “With his assistance, I was invited to deliver a guest lecture at the National Taipei University of Law, was hosted at the National Taipei University of Technology and was able to spend two days at the Legislative Yuan, the national legislature for the Republic of China on Taiwan.”

“Throughout my time in Taipei, the mere mention of George Huang’s name not only opened doors, but was met with the most graciously warm recognition of Dr. Huang’s warmth, friendliness and top-notch scholarship,” said Luehrmann.

Even Huang’s educational background is a global affair; he earned his bachelor’s degree in Taiwan, his master’s in Canada and his doctorate in the United Kingdom.