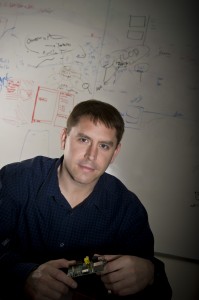 Cory Henson is a Ph.D. student conducting research with the semantic Web and on-body sensors that send medical data to smartphones.

When Cory Henson was a little boy growing up in Georgia, his mother bought him a computer. When she returned to check in on him, the guts of the machine were scattered around his room.

“I took it apart the first day; it freaked her out,” Henson recalled.
Today, the Wright State University researcher is tearing down barriers to a new frontier in computing.

He is working to create intelligence and more effective tools for living by combining and interpreting information from the Web and from sensors. That could translate into devices that warn of everything from asthma attacks to heart attacks.

“If you can integrate the data together, it becomes much more valuable,” Henson said.

Henson’s skill is not lost on Amit Sheth, Ph.D., LexisNexis Ohio Eminent Scholar and the director of the Ohio Center of Excellence on Knowledge-enabled Computing, or Kno.e.sis. Sheth is also Henson’s advisor.

“Cory is curious about many different areas of research and is able to integrate ideas from several disciplines and apply them to help solve a challenging and complex real-world problem,” Sheth said.

Born and raised in the Atlanta area, Henson attended Berkmar High School, where he played soccer and graduated as one of the top students in a class of about 400. He attended Jacksonville University on an academic/soccer scholarship, but soured on soccer and transferred to the University of Georgia.

At Georgia, Henson pursued bachelor’s degrees in both computer science and cognitive science, which is the study of the mind. It was a way for Henson to marry computer science with philosophy and psychology.

“I was always into philosophy; I like to play with ideas,” Henson said.
A fan of empiricist philosopher John Locke, Henson was taken with the notion that knowledge is built from the ground up by perception.

“All of our experiences come directly from the senses, and we learn things through this direct experience with the world,” Henson said.

During his senior year, Henson met some fellow students who were working in knowledge modeling, exactly what Henson had been reading about in cognitive psychology. The students were under the supervision of Sheth, so Henson took Sheth’s course and began working for him. Henson was one of the 10 Ph.D. students who moved with Sheth to Wright State in 2007.

“I knew nothing about Ohio. I knew nothing about Wright State,” Henson said. “But I think it’s a good little school. There is a lot of interesting research going on here. I like it.”
Some of that interesting research is work the 30-year-old Henson himself is conducting in an area called the semantic Web. The goal is to marry text, audio and video streaming from the Web in order to create a greater knowledge.

In addition, Henson collects data from on-body sensors that measure such things as weight, sleep, heart rate, blood pressure and perspiration. The sensor data is then fed into a smartphone, which downloads medical information from the Web.

“So if your blood pressure just went up two points, your heart rate jumped three beats, you begin to perspire and you cannot remember taking you last medication, you might be able to find out exactly what is happening to you medically,” Henson said.

Henson is working with researchers at The Ohio State University to develop a “disorder detector” that could be given to heart patients who are released from the hospital. The device would be designed to catch the beginnings of another heart attack, resulting in early intervention and preventing another expensive stay in the hospital.

Excessive rehospitalization of chronic heart patients has been identified as one of the top health care challenges, costing $17 billion a year.

“All that studying in philosophy and cognitive psychology actually came to bear,” said Henson. “I extracted a few nice ideas from psychology, was able to develop algorithms that mimicked these ideas, and we use that for interpreting the sensor data. It’s based on human perception, but getting machines to do it.”

Henson is doing similar research with the University of California-Irvine, which has computer software capable of capturing symptoms of entire populations such as those that occur with high pollen counts.

“It can come from sensors, but often it comes from social networks like tweets,” he said. “If through sensors we can detect you are nearing an asthma attack and from data on the Web detect that the pollen count is increasing, the combination could serve as an early warning system.”

Henson has also collaborated with the Air Force on sensor-data management and has done defense intelligence work at the National Air and Space Intelligence Center.
Sheth is not surprised at Henson’s accomplishments. He has watched master’s degree students from Kno.e.sis go to top companies and command starting salaries of as much as $120,000. One Ph.D. student was hired as a faculty member at Case Western Reserve. Others have gone on to the likes of IBM Research, Amazon Web Services and Samsung Research.

“The people who recruit our students know they are going to be contributing right away,” Sheth said. “They’re not going to require training.”

In 2011, Henson, was nominated as editor for a report on Semantic Sensor Networks by the World Wide Web Consortium, or W3C, the main international standards organization for the Web. This in turn led to him being invited to give a keynote at an international workshop held in Venice, Italy.

Among his other significant activities include giving a tutorial at the International Conference on Knowledge Engineering and Knowledge Management; and serving as a guest editor for the Semantic Web Journal: Special Issue on Cognitive Science and the International Journal on Advances in Intelligent Systems.

Scheduled to graduate this summer, Henson has his eye on academic positions.
“I want to do research, and in academics you have a bit more freedom to do research,” he said. “But I would be happy at an industry research lab as well—as long as I keep playing with ideas.”