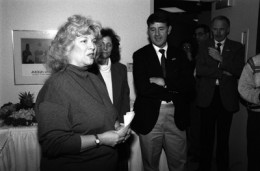 Due to the recommendations of the Task Force on the Status of Women in the Academy and the work of many administrators and allies, the Women’s Center opens in 1993. Mary Beth Pringle, Ph.D., chair of the task force and interim director of the Women’s Center, welcomes the crowd.

Since 1993, the Wright State University Women’s Center has worked to serve women on campus and in the surrounding area through facilitating connections, providing resources and advocating for equitable experiences and opportunities for all people. The Center actively seeks to create an environment in which women are supported, encouraged and less isolated than what has been documented historically.

Women’s Studies (WMS) is an interdisciplinary program that places women in all their diversity at the center of inquiry and examines how gender influences our personal identities, cultural and artistic expressions, social arrangements, political and economic systems and even our ways of knowing and understanding the world. The Bachelor of Arts program in Women’s Studies is organized around three major areas of inquiry: feminist thought, women in multicultural perspective, and women in international perspective.

Join us in celebrating 20 years of partnership between the Women’s Center and the Women’s Studies Program Friday, March 8, 2–4 p.m. in the Millett Hall Atrium.

Jennifer Finney Boylan, author and transgender activist, was the 2011 Women’s History Month Scholar-in-Residence. A professor of English at Colby College in Maine, Boylan has written 13 books, including two memoirs, She’s Not There: A Life in Two Genders and I’m Looking Through You: Growing Up Haunted. The former memoir was the Women’s Center’s Winter Reading Selection.

2009 Women in Art: Unheard Voices artist Frances Turner returned to Wright State for a special display and discussion of her work. A seamstress/tailor with 50 years of experience, Frances said her love of diverse fibers and all natural materials established her as a doll artist and quilter. She shared how each person she encounters is material for her creations.

On January 15, 2008, the Women’s Center celebrated 15 years of serving Wright State University and the community. Since 1993, the Center has been a beacon of hope and change for the thousands of constituents it has served. Packing the Nutter Center’s Berry Room, the 200 guests included students, faculty, staff, and administrators from WSU; local elected officials; community supporters; alumni; and Women’s Center colleagues from across southwest Ohio.

Now in its 14th year, the Women in Art: Unheard Voices show continues to help women artists put together the body of their work for a show. The 2010 artists (l–r): Samantha Layne, Carol Moore, Sheryl Scott, and Lillian Herbert.

Take Our Daughters and Sons to Work Day, an event sponored by the Women’s Center, has been a hit with faculty, staff, and their children for years. Among the day’s most popular sessions in 2008 were those in the sciences, where students can use the microscopes to test DNA.

Since 1993, the Women’s Center has served campus and the community. Pictured here are two students with Paulette Olson, Ph.D., director of ther Women’s Center.

Due to the recommendations of the Task Force on the Status of Women in the Academy and the work of many administrators and allies, the Women’s Center opens in 1993. Mary Beth Pringle, Ph.D., chair of the task force and interim director of the Women’s Center, welcomes the crowd.