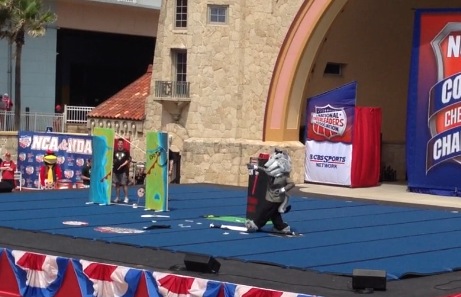 Rowdy Raider bested nine other university mascots at the annual competition in Florida.

For the first time in school history, Rowdy Raider is the NCA Mascot National Champion! Senior Matt Herman has been Rowdy Raider for the past five years.

Mascots performed 90-second skits and were judged based on creativity, ingenuity, use of props and audience engagement.

“I was incredibly surprised when I won because this has been my dream for a while,” said Herman. “It’s really selective just getting a chance to compete. I’ve been trying to perform in this competition for the last four years.”

Herman, who works in production for WDTN-TV, used a news-themed skit and made sure to engage the crowd often. His journey to a championship began last summer during the Mascot Training Camp when he was crowned the Best Overall Mascot of the camp and a Mascot All-American earning him an invite to the national competition.

“I’ve been working so hard at this. When they announced the second place winner I gave up,” said Herman. But just moments later he had reason to rejoice.

“When they called my name, I just stood there for several seconds in disbelief,” said Herman. 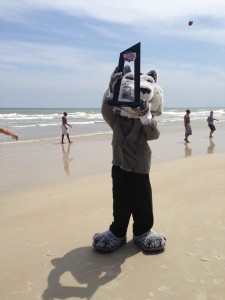 Rowdy with his trophy on Daytona Beach.

Wright State Cheerleaders in the top 10 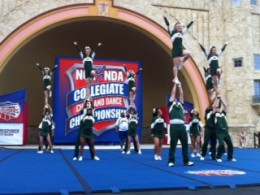 The Wright State Raider cheerleader team also earned a top 10 finish in the 2013 NCA College Cheerleading National Championship. The team finished ninth overall in the co-ed intermediate division and was the runner up to the University of Michigan, the eventual national champion in the challenge cup round.

Over 7,500 athletes from 298 teams competed at the event from 17 divisions. The team has set its sights on the 2014 championship and is eager to get the new season under way in support of the sports teams. 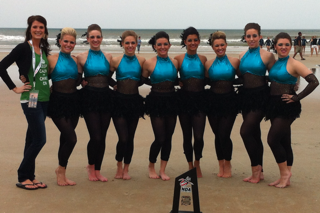 The Wright State Emerald Jazz Dance team also placed in the top five in the Open Dance final competition round in the 2013 NDA College Dance Team National Championship. The dance team point total averaged 9.253 out of 10 finishing fourth out of 21 dance teams in the division.

The Open Division is defined by performing a dance genre of your choice. The team chose jazz and performed to a medley of songs from the artist Aretha Franklin.