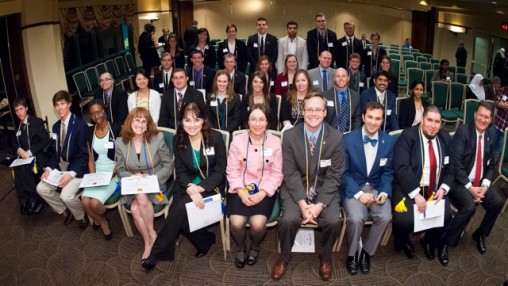 The 2013 class is the largest the Wright State Beta Gamma Sigma chapter has inducted in its 38 year history.

Fifty Raj Soin College of Business students, along with Barry James of James Investment Research, were inducted into Beta Gamma Sigma, the highest international business honor society on Friday, April 19, 2013.  Approximately 150 individuals attended the event, the largest in the 38-year history of the annual induction at Wright State University. 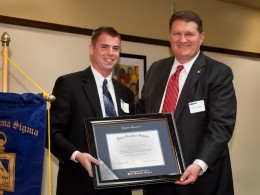 Honorary inductee, Barry James CFA, CMA, is president and CEO of James Investment Research, and president of James Advantage Funds. He also serves on the Raj Soin College of Business Corporate Advisory Board.

Joanne Li, Ph.D., CFA, and dean of the Raj Soin College of Business congratulated James, the student inductees, their families and guests at a dinner following the ceremony.  She recognized the new inductees as the best and brightest students in the College and urged them to dream big as they progress in their future business careers. 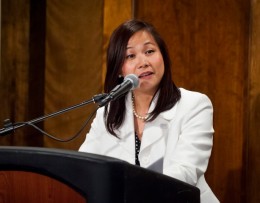 Dean Joanne Li shared how proud she was of the inductees and reminded them that their support network of family and friends also deserve praise and appreciation.

The special evening was concluded with a dinner in the Wright State University Nutter Center Berry Room.