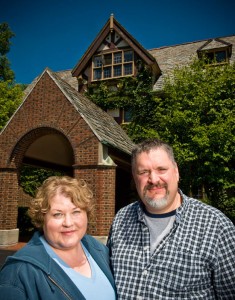 Earlier this year, the film was released on DVD and became available to stream from cable providers and on other major services like iTunes and Amazon Instant Video.

True Nature was filmed entirely in the Miami Valley by director Patrick Steele (’97) and producer and editor Ann Rotolante (’09).

Steele and Rotolante, both advocates of grassroots independent filmmaking in the Dayton area, made the film with the assistance of more than 40 Wright State alumni, professors and students.

Most of the film’s supplies were bought locally, and many of the actors are from the Midwest. The movie was shot at numerous Dayton locations including Kettering Tower, the Schuster Center parking lot and the former Pacchia restaurant in the Oregon District. Dayton businesswoman and local arts patron Beth Duke served as co-producer. Duke also lent her family home, Hook Estate, to the production as the film’s primary set.

True Nature has been an official selection at 40 film festivals in the United States and abroad and has won numerous awards.

The film was featured in the fall issue of the Wright State University Magazine.