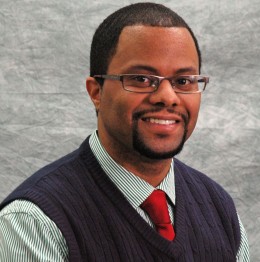 Darius Prier, a double Wright State grad, is now an assistant professor of educational foundations and leadership at Duquesne University.

Hip-hop, Darius Prier says, is a culturally relevant form of education, rather than just a form of entertainment.

Urban youth, he says, are “finding their identities and producing new forms of social knowledge through the culture of hip-hop in ways that contrast and challenge the traditional culture of schools.”

Prier, who has two degrees from Wright State and is now an education professor at Duquesne University, explores these ideas in his book Culturally Relevant Teaching: Hip-Hop Pedagogy in Urban Schools.

The book examines the use of hip-hop in urban schools and community settings that operate outside the boundaries of traditional schools but provide young people with learning opportunities.

As education focuses on standardized testing, Prier said, many youth have become disengaged and have turned their creative and intellectual energies toward hip-hop.

Prier is particularly interested in youth settings that take hip-hop’s progressive and political potential seriously, rather than the familiar celebration of sexism, misogyny and violence promulgated by the mainstream music industry.

He explores how hip-hop’s progressive value can serve as an alternate form of education that is both relevant and empowering to urban youth.

“The study of hip-hop offers unique learning opportunities to explore how beats, rhymes, lyrics, images, fashion, and media can translate into a teaching canvas to explore subjects such as English, social studies, African American history, math, science, and other related disciplines,” he said. “It’s not just about connecting the culture to academic disciplines, but relating the culture and subject matter to contemporary societal issues, and working with youth to cultivate a set of values that will foster their leadership potential.

Studying hip-hop provides insights into the way young people view education and the world, he said. “It influences the attitudes, decisions and choices they make in society, and its meanings and messages compete heavily against the traditional culture of schools,” he said.

At Wright State, Prier received his B.A. in political science, while minoring in African American Studies, in 1999, and an master’s in public administration in 2001. As an undergrad, he received a tennis and academic scholarship. He received his Ph.D. in educational leadership at Miami University.

He will return to Dayton for a reception sponsored by the Department of Urban Affairs and Geography on Friday, Oct. 11, noon–2 p.m., in room 111, University Park, 3855 Colonel Glenn Highway (across the street from Meijer).

Prier is an assistant professor in the Department of Educational Foundations and Leadership in the School of Education at Duquesne.

Previously, he was a faculty member at Virginia Commonwealth University, where he taught graduate courses in school and community relations and was the assistant director of admission/coordinator of multicultural affairs at Miami University.

He describes himself as an educational leader who is anchored in social justice work. As a writer, researcher and community advocate, Prier is interested in hip-hop because it represents the voice of urban youth. He pursued a career in academia because it enables him to do activist research in many places, including churches, streets, schools and the academy.