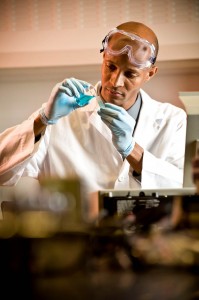 Growing up in Jamaica, Courtney Simons would climb his grandmother’s pimenta trees, break off branches and bring down the berries, which would be dried in the sun and used as allspice to flavor and season food.

As it turned out, it was the beginning of a career in food processing for Simons, with stops that took him from Jamaica to India to North Dakota and now Ohio.

“This is a strategic place to process food because the raw materials are right here,” he said. “We want to provide the food scientists—individuals who understand the science behind food—who will operate as technicians, food technologists, operators, advisors, managers.”

Food processing is booming in Ohio.

“He offers a breadth of experience and excitement that will grow a highly successful program,” Homan said. “We hope the new food science options will contribute to efforts to grow our local economy, providing the skilled workforce that our prominent food and agriculture industry needs to grow and expand.”

Homan said the program will also appeal to food-processing employees who want to increase their skills and take on an enhanced role.

The mission of food science—which involves chemistry, physics, biology, math and engineering—is to ensure that food is nutritious, of high quality and safe to eat. It is also aimed at minimizing waste and finding ways to make the most efficient use of ingredients.

Courses to be offered beginning this spring include food processing, food safety, food laws and regulations and an introductory overview of food science.

“What we’re trying to do is teach the students what happens to the food from the moment it comes into the plant to when it leaves and right up to the point where it reaches the plate of the consumer,” Simons said. 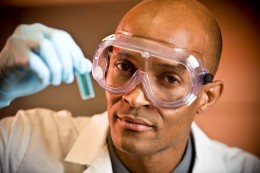 The mission of food science—which involves chemistry, physics, biology, math and engineering—is to ensure that food is nutritious, of high quality and safe to eat.

Near the Lake Campus, the Dannon plant in Minster is the largest yogurt manufacturer in the world, turning out 3 million cups a day. AGRANA in Botkins is the largest producer of fruit preparations for the dairy processing industry in the nation.

“It’s a booming area,” Simons said. “There is a lot of potential.”

Simons obtained his associate degree in agriculture in Jamaica, then took a government job as a lab technician running tests on foods and teaching people how to make jams, jellies, juices and canned products. As part of the job, he was sent to India for a year to study flour-milling technology.

When he returned to Jamaica, Simons held jobs as a food inspector, food safety consultant and food-processing instructor at an agricultural institution.

Then, with a herculean effort and much persistence, he won a full scholarship from the Organization of American States to seek a food science degree at North Dakota State University.

The change in climate was a bit of a shock.

“The day I left Jamaica it was 85 degrees; when I got to Fargo, North Dakota, it was minus 20,” he recalled. “But for me it was exotic. I was seeing snow for the first time.”

At North Dakota State University, Simons obtained his bachelor degree in food science and then went on to graduate school where he completed requirements for the Ph.D. in cereal science. He plans to travel back to North Dakota in December to attend graduation.

Simons has been conducting “listening stops,” visiting with food processors near the Lake Campus to determine their workforce needs.

“One plant manager told me he wished that he had people knocking on his door saying, ‘I have a food science degree,’” Simons said. “They’re looking for people with backgrounds in food science. It’s really difficult to find those individuals.”

Simons is looking to collaborate with local food processors by creating an internship program and establishing an industry advisory board.

“They would be responsible for ensuring that our program is consistent and relevant with what the industry needs,” he said.

Simons said food science is a good supplement to degrees in business, education or engineering.

“In the food science industry, you have to work with equipment, technologies and computer systems,” he said. “So the more you understand about how these function, the more equipped you are to perform well as a production manager.”