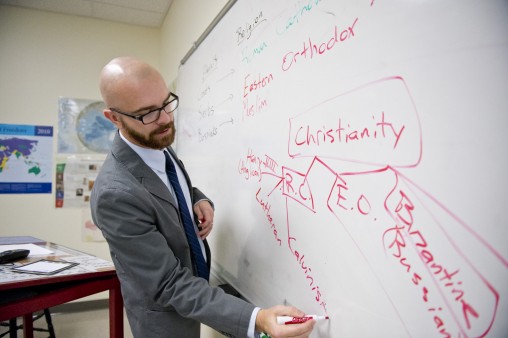 Arch Grieve wanted to impact public education in his hometown by becoming a teacher there. When that didn’t work out, however, Grieve found another way to accomplish his goal.

The 27-year-old Wright State graduate was elected to the Xenia Community Schools Board of Education in November 2013 and will begin serving his term in January 2014. 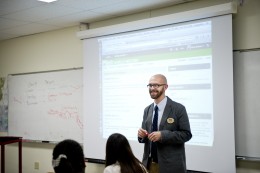 Grieve was elected to the Xenia Community Schools Board of Education in November 2013 and will begin serving his term in January 2014.

“I had always wanted to be involved in the Xenia school district,” said Grieve, who grew up in the district and graduated from Xenia High School. “I got my teaching license specifically to allow me to teach in the district. But, just as I was finishing up my license, the district began laying off teachers.”

Grieve instead found work as a world history and economics teacher at the Dayton Regional STEM School. Wright State helped develop the five-year-old school, which offers real-world experience that helps prepare its 500-plus students for careers in science, technology, engineering and mathematics.

“I had a ton of amazing professors at Wright State, and so many have been willing to come here to the STEM School and talk to our kids,” Grieve said. “We definitely benefit in many ways from Wright State’s expertise.”

The Xenia district faces a number of challenges, including multiple lawsuits, Greene County’s second-lowest graduation rate and public disagreements among current board members that helped spur Grieve into becoming a candidate.

“I mulled it over for a year or so,” Grieve said. “Seeing all the dysfunction on the board at that time, and people encouraging me, really led me to throw my hat into the ring.

“I have seen how decisions made by the Xenia board impact the learning environment there. First, any dollars wasted are dollars that can’t be put into the classroom. Second, the public perception that the school is wasting tax dollars makes it very difficult to get a levy passed.”

Grieve earned his bachelor’s degree in social science education from Wright State in 2008 and is currently pursuing master’s degrees in public administration as well as international and comparative politics.

Of course, Grieve, would not be allowed to both teach in the Xenia district and be a member of the school board. That is just fine with him, however, as Grieve said he has thoroughly enjoyed his four years at the STEM School and hopes to remain there for a long time to come.

“I would not be the teacher I am today if this had not been my first job,” Grieve said. “There is a real emphasis on collaboration. I had excellent mentors and I learned a lot about project-based learning and use of classroom technology.

“We try to emphasize global citizenship in very tangible ways. Our students learn what it means to think globally and act locally.”