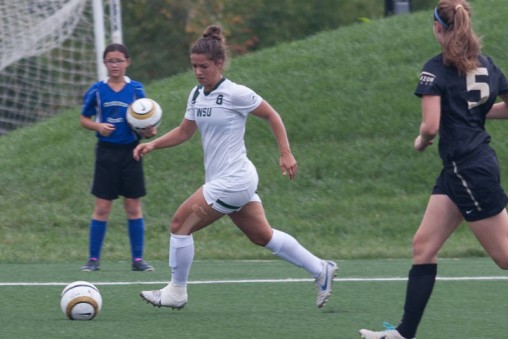 Emilie Fillion was a Second Team All-Horizon League selection in 2013 for the Raiders.

Emilie Fillion, who completed her playing career for the Wright State women’s soccer team this past fall, has signed a professional contract with FC Twente of the Dutch Premier League.

Fillion graduated from Wright State with degrees in criminal justice studies and psychology and is pursuing a M.A. in applied behavioral science.

She will fly this Friday to Holland and join the team for the majority of the second half of the season. The team is currently in second place behind Standard Liege (Belgium) looking to repeat last year’s success to win the championship.

“Having Emilie signing a professional contract with our partner club FC Twente is great not just for Emilie but also for the club and our women’s program,” said Sid van Druenen, who was Fillion’s coach with the Dayton Dutch Lions in 2013.  “Playing for the Dayton Dutch Lions FC (W-team) will give players the opportunity to develop towards the dream of playing professional soccer, and I am sure Emilie will do well in European professional soccer. She is a very determined and strong player with the ability to decide games not only by scoring decisive goals but also with a tremendous work rate and team spirit.”

“This is exactly what we set out to accomplish when we started the Dayton Dutch Lions FC four years ago: give players a chance to become professional players, either in the U.S.A. or (even better) in Europe,” said Dayton Dutch Lions President Mike Mossel.  “FC Twente is not just a team, Emilie will soon find out that this is one of the top organizations in Europe when it comes to soccer. Their women’s program is very well structured and marketed. Due to her determination and scoring ability, I am sure she will contribute to the team and do very well like she did for us.”

FC Twente is a Dutch professional soccer club that plays in the city of Enschede. The men’s team plays in the Premier League and won the National Championship in 2010 and the Dutch KNVB CUP in 2011. They are currently in the top three.

The women’s team won the Championship of the Benelux League (Belgium, Netherlands, Luxembourg) in 2013 after beating Standard Liege at home.

“Signing Emilie is good for the dynamics in the team. She brings experience from another country that can benefit us,” said FC Twente Head Coach Arjen Veurink. “With her attacking qualities she will contribute to the team and also bring extra competition which will be good as well.”

A Second Team All-Horizon League selection in 2013 for the Raiders, Fillion ended the season third in the league in points (21), tied for third in goals (8) and tied for sixth in assists (5).  She scored two goals against Findlay and had one each against IPFW, Ohio, Nevada, Dayton, West Virginia and Youngstown State. Her five assists came versus IPFW, Butler, Milwaukee, Green Bay and Cleveland State, with the final three assisting the game-winning goal in 1-0 victories.

She was the Horizon League Offensive Player of the Week on Aug. 26.

An Academic All-District honoree by the College Sports Information Directors of America (CoSIDA) in 2013, Fillion was twice named Academic All-League and also got national recognition when her bicycle kick goal for the Dayton Dutch Lions against the Carolina Cobras in a USL W-League match in June was on ESPN’s Top 10 Plays.