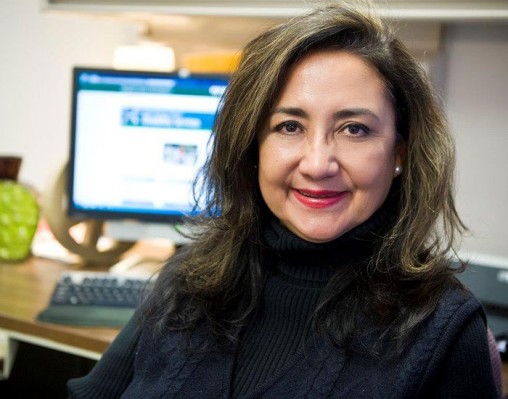 After working as a dentist and teaching in Mexico, Erendira López-García is now associate director of clinical training in Wright State's Office of Disability Services, where she supervises students from the School of Professional Psychology.

It wasn’t all that long ago that Erendira López-García was working as a dentist in her hometown of Cuernavaca, a historic, picturesque city in southern Mexico.

Specifically, she spends much of her time at the Office of Disability Services, where she is associate director of clinical training. She supervises students from the School of Professional Psychology who counsel and evaluate students with disabilities and help them with academic and psychological problems.

She is also an active scholar, presenting topics on disabilities and multicultural issues to the community, universities and at state and international conferences.

In high school, she was quick to resist the pressure in Mexican society to be a housewife and mother instead of pursuing a career.

“In my mind, I always wanted a profession and being independent financially from anyone,” she said.

So she left home to study dentistry at the University of Mexico in Mexico City, returned home to Cuernavaca and for the next five years practiced dentistry. Then one day she began teaching Spanish in schools that served foreign visitors.

“It started opening my mind about what the world looked like,” she said.

López-García met her future husband, Victor, a professor at Antioch College in Yellow Springs, Ohio, when he brought a group of his students to Cuernavaca to study Spanish. They married and, in 1987, she moved to Yellow Springs and began teaching Spanish at Antioch.

For a young woman from southern Mexico, it was a culture shock. Her accent and limited command of English made it difficult for her to communicate with the locals. (Even ordering French fries was a challenge.) And she was baffled by cultural norms such as keeping a certain distance when talking to people and calling ahead before paying someone a visit.

The whole experience led López-García to re-evaluate her future, and she decided to pursue a career in psychology. She obtained another bachelor’s degree, this time in human development, from Antioch and then was admitted to SOPP to work on her doctorate, taking on the challenge of mastering advanced psychology along with the highly technical English terminology.

“I thought, ‘I’m not going to make it,’” she recalled. “After one class, I started crying because it was hard for me to understand the high level of vocabulary.”

But she did make it.

After graduation, she interned at the University of Michigan and then returned to Wright State to do her post-doctoral fellowship at the Office of Disability Services. In 2005, she was hired as a staff psychologist.

López-García also has a private practice, providing services to the English and Spanish-speaking population suffering from depression, lack of self-esteem and anxiety, especially with people from other countries who encounter difficulty adjusting to the mainstream culture.

In addition, she travels the state trying to help Latinas discover their leadership skills as part of a community outreach program called Latinas in Ohio: Facing Challenges and Taking Action.

When she is not working or volunteering, López-García unwinds with a little Zumba, reading books by Latin American authors, meditating and cooking. She especially enjoys making pozole, a traditional Mexican meat-and-hominy soup.

“What relaxes me the most is to cook,” she said. “It just takes me away from my different professional roles.”

Although she tries to visit family back in Mexico at least once a year, López-García has settled in at Wright State, where her son is a senior at the Raj Soin College of Business.

“I’ve spent a lot of time here, and it feels like home now,” she said. “It is a special place because I have felt supported in many ways. And I really like the university’s focus on multicultural diversity issues because that is something I feel passionate about.”