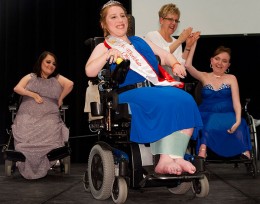 Wright State student Elizabeth Schrack won the 2014 Ms. Wheelchair Ohio pageant and will represent the state at a national competition in August.

A Wright State student will advance to the Ms. Wheelchair America pageant after her recent victory at the state competition.

The Ms. Wheelchair Ohio pageant is designed to find a charismatic and well-spoken woman who can advocate for the innumerable Ohioans living with disabilities—and that’s exactly what they found in Elizabeth Schrack, who was crowned winner of the 2014 competition held at Wright State University April 6.

“It came as a total shock that I actually won,” said Schrack. “I felt like I was in a dream. As soon as I found out, I was like ‘Oh my gosh, oh my gosh!’”

Schrack beat out three other competitors, all of whom currently attend Wright State.

Schrack has been living with cerebral palsy for her entire life, but she doesn’t let her wheelchair slow her down. She is currently earning a degree in social work from Wright State. Throughout her studies, Schrack has been involved in activities that have put her in the forefront of advocacy for others with disabilities. 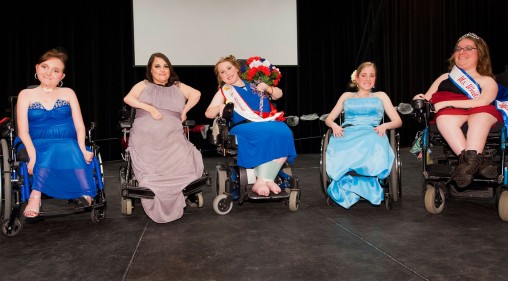 “The scores of all of the contestants were extremely close,” said Tom Webb, director of the Office of Disability Services at Wright State and a judge for the Ms. Wheelchair Ohio pageant. “Elizabeth was the most well spoken and could answer questions with a humor and frankness that set her apart from the other candidates.”

Although this is Wright State’s first year hosting the pageant, the university has turned out the most contestants of any Ohio university in recent years.

“We were honored to have the chance to host this year, as all four contestants were from Wright State,” said Webb. “However, Schrack’s victory reflects best on her, rather than on Wright State. The Office of Disability Services’ biggest role in her victory is that of encouraging her to be an advocate for herself and giving her the knowledge of platforms like Ms. Wheelchair Ohio to do so with a bigger voice.”

The Ms. Wheelchair Ohio program was established in 1972 by Dr. Phillip Wood. Since the first pageant in 1974, the nonprofit program has brought together enthusiastic women in wheelchairs to promote awareness and break the barriers that many Americans with disabilities face.

In the wake of her victory, Schrack has begun preparations for the Ms. Wheelchair America 2015 pageant, which brings state titleholders together to determine the national spokeswoman for those with disabilities. The event will take place Aug. 4–10 in Long Beach, Calif. Contestants will participate in a leadership institute, mentoring events and judging sessions.

Schrack said she is overwhelmed with excitement but still has a lot of work to do.

“Going to the national competition will be very expensive,” said Schrack. “I need to pay for airfare and other expenses, so I’ll be doing some fundraising in the meantime.”

To help Elizabeth Schrack achieve her dream of taking the national crown, visit her fundraising website at gofundme.com/86hp8c.

More information about the Ms. Wheelchair America 2015 pageant is available at mwa2015.com.