An iconic, accessible entrance will be built on to the Creative Arts Center as part of the expansion and modernization project.

The university and the College of Liberal Arts (COLA) kicked off the modernization project Friday, April 11, with a groundbreaking ceremony.

Construction is expected to be completed by the 2016–17 academic year.

The Creative Arts Center houses the Departments of Theatre, Dance, and Motion Pictures; Music; and Art and Art History, and the Ohio Center of Excellence in Collaborative Education, Leadership and Innovation in the Arts (CELIA). 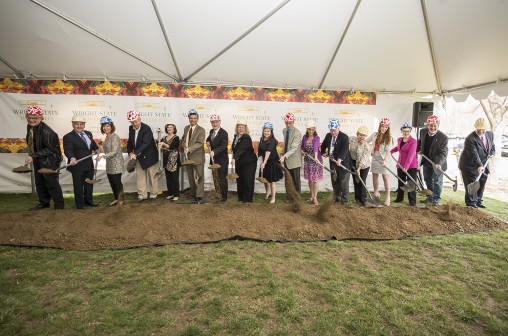 Wright State President David R. Hopkins said the project will transform the Creative Arts Center into a “one-of-a-kind masterpiece where our star students and faculty can truly shine.”

The benefits of the revitalized facility, he said, will reach beyond the Wright State campus.

“This will be one of our cultural gems that will drive economic development, it will drive innovation and it will drive creativity in our region for many years to come,” Hopkins said.

“We have fantastic arts programs at Wright State, including an Ohio Center for Excellence, and our students deserve the best facilities, classrooms, labs and performance venues to showcase their wide array of talent,” said College of Liberal Arts Dean Kristin Sobolik. “The makeover will set the stage for showing off our fantastic students and wonderful programs.” 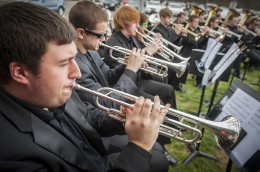 A new home for the Robert and Elaine Stein Galleries will be constructed, while the existing art gallery space will be transformed into art studio classrooms. The Motion Pictures Program will transform the television studio into a new production studio.

The building will also be expanded to include a new iconic, accessible entrance. The entrance will symbolize the “excellence of our arts programs and the fact that for many people, the arts are the front door of the university,” said Linda Caron, associate dean for faculty and external affairs in COLA.

The project will cost $22.75 million. Funding includes $11 million from bonds and $3.65 million in state capital funds, with the remainder coming from donors and friends of the college.

The Creative Arts Center leadership donors — Don and Gloria Graber, Larry and Marilyn Klaben, Marla Schuster Nissan (representing the family of Benjamin and Marian Schuster), and Robert Stein Jr. and Cindy Stein (representing Robert and Elaine Stein) and Howard and Sally Stevens — were on hand for the groundbreaking.

The ceremony also included a celebratory fanfare, composed by Wright State alumnus Stephen Hampton and performed by the Brass Studio, and a performance of “One Day More” from the recent Wright State production of “Les Misérables.”