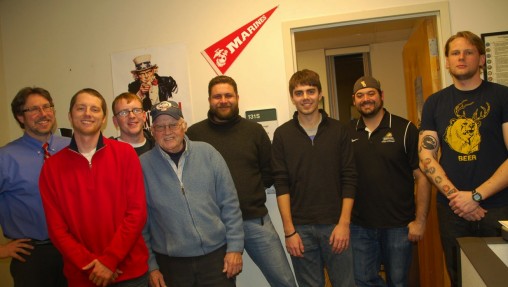 A new oral history class is using storytelling to connect Wright State student veterans with others who have served in the military, while helping older veterans relive decades-old experiences.

The interviews, along with edited six-minute versions produced by the students, will also be made available in the Wright State Archives through Core Scholar.

Offered for the first time during the Spring Semester, the course is organized by Seth Gordon, Ph.D., director of Wright State University’s Veteran and Military Center, and Bridget Federspiel, adjunct professor of history. Carol Herringer, Ph.D., chair of the Department of History, approved the creation of the class.

They designed the course to encourage veteran students to talk to older veterans while also promoting relationships across different generations.

“There’s a strategic element here in terms of training veterans to talk to veterans because you get better stories,” Gordon said. “There’s more of a sense of trust. You know what it’s like, even if you weren’t in combat, you know what boot camp is like, you knew people who were there.”

Craig This, a data analyst in Wright State’s Office of Institutional Research, experienced that connection when he was interviewed for the class about his time as a combat engineer in the U.S. Army in the 1980s. He said it helped to tell his story to another veteran.

“I’m typically a pretty private person,” This said. “There’s not a lot that I share with people. So to sit down almost 30 years removed from serving to talk about stuff that I never really ever talked about to anybody else, I think it was cathartic.”

Tyler Thompson, a junior majoring in rehabilitation services who served as a tank commander in the U.S. Army in both Iraq and Afghanistan, said students in the class have also bonded with one another during the semester.

Students have met with veterans who served in World War II, Vietnam and during peacetime, and have developed relationships with local VFW and American Legion posts thanks to connections Federspiel has.

Federspiel, who has an M.A. in history from Wright State, also teaches a veterans oral history class at Stivers School of the Arts, where she teaches social studies. Her students at Stivers have recorded more than 360 interviews since 2005.

The interviews can be a healing process, Federspiel said, for both the veterans who are willing to talk finally about their military experiences and the student veterans who get to talk to an older veteran.

Meeting older veterans has also reinforced that Thompson can be successful “no matter how bad things get.”

“They’ve been a great example and have definitely motivated me and inspired me to continue pursuing my passions,” Thompson said.

Students have studied history and learned how to conduct interviews, record and edit audio and video footage, and give presentations.

“It’s a very engaged, pragmatic approach to history,” Gordon said. “But a lot of it is about them learning how to do oral history and learning to record and talk to each other.”

Gordon and Federspiel hope the students are also getting much more out of the course. “It’s not just about a veterans voices oral history class,” Gordon said.

Students have also learned skills they can use as students and later in their careers.

“Learning how to talk to people in a structured way, to get their stories, to listen to them, these are all really important skills,” Gordon said. “It’s not just about writing papers. They have to do that in so many other venues. This is about learning other skills that I actually think are more 21st-century focused.”

The students’ first assignment was to create a short vox pop, or person-on-the-street, interview by talking to people around campus.

Anthony Hinojosa, who served as a combat yeoman in the U.S. Navy and is now the director of academics for Student Government at Wright State, has taken the vox pop method beyond the class, using it to gauge students’ opinions of various campus issues.

Hinojosa, a junior international studies major, said gathering stories is an effective way not only to learn about history but also to understand what veterans experienced when they served.

“What was going in your head while you were there?” he said. “What’d you do for fun? What were your feelings pulling watch in the pouring rain for 12, 15 hours? Remarkable things.”

“It makes you a part of it,” Hinojosa said. “It takes you on the ground, what was actually happening.”

Even though he has served in two wars, Thompson said, he was struck with how different older veterans’ stories are from his own experiences.

“You get a completely different perspective and you learn so much. You learn how things change so quickly,” he said. “I love hearing the firsthand accounts of what people experienced over there.”

This, who received a bachelor’s degree in history, was impressed that his interview focused on his personal experiences and how his community responded to his service.

“This was more about the day-to-day life of the soldier, sailor and Marine,” he said. “It really got down to the motivations of why you served and why you did what you did.”