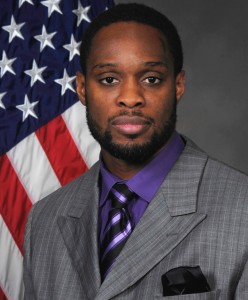 Onome Scott-Emuakpor graduated from Wright State in 2002 and is now an aerospace research engineer at the Air Force Research Laboratory.

Onome Scott-Emuakpor, a Wright State University alumnus who works on turbine engine programs at the Air Force Research Laboratory, was honored by President Obama with the Presidential Early Career Award for Scientists and Engineers.

Scott-Emuakpor, who graduated from Wright State in 2002 with a B.S. in mechanical engineering, was among 102 researchers honored. The award is the highest honor bestowed by the U.S. government on science and engineering professionals in the early stages of their independent research careers. Scott-Emuakpor, Ph.D., received his award in the Department of Defense category.

“It’s an honor to receive this award, though I never strived for it. I prefer being an inconspicuous engineer stuck in a remote lab,” he said. “But I think more student athletes, especially those in science and technology, should strive for something like this. This is one of the most rewarding things that has ever happened to me.”

Scott-Emuakpor was a member of the Wright State men’s basketball team from 1997 to 2000.

Today, he is an aerospace research engineer at the Air Force Research Laboratory Aerospace Systems Directorate at Wright-Patterson Air Force Base.

The Presidential Early Career Award embodies the high priority the Obama administration places on producing outstanding scientists and engineers to advance the nation’s goals, tackle challenges and contribute to the economy. Established by President Clinton in 1996, the awards honor researchers who pursue innovative research at the frontiers of science and technology and are committed to community service through scientific leadership, public education or community outreach.

Scott-Emuakpor received a Ph.D. and M.S. in mechanical engineering from The Ohio State University.