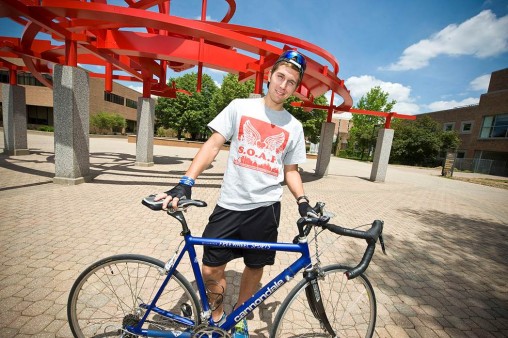 The words on the radio freaked out Ian Kallay, a 7-year-old growing up in Painesville, Ohio, at the time.

“I developed this fear that it was going to happen to me,” recalled the now 20-year-old Kallay. “I had very vivid nightmares of people coming in and taking me.”

The Amber Alert terrified Kallay, but it also planted a seed by opening his eyes to the reality of child abductions and sex trafficking. And the Wright State University student has now decided he can no longer sit idly by.

On June 23, Kallay will hop on his bicycle in front of Wright State’s Student Union and begin pedaling to San Francisco as part of a grueling 100-mile-a-day, 40-day odyssey to raise public awareness about sex trafficking.

Sex trafficking is defined as the recruitment, harboring, transportation or obtaining of a person for the purpose of a commercial sex act where such an act is induced by force, fraud, coercion or in which the person induced is younger than 18. There are nearly 2 million children in the commercial sex trade worldwide, according to UNICEF.

Victims of sex trafficking come from all socioeconomic backgrounds. Traffickers zero in on insecurity and vulnerability. Girls fighting with their parents and who sometimes leave their homes in the evening to get away can be targets. Parties, shopping malls and bus stops are common places to recruit them.

Kallay’s decision on how to fight sex trafficking took awhile to sprout.

When he was 16, he read “Be the Change,” a book about efforts to abolish human slavery and trafficking. His global perspective was reinforced when he spent time in the African country of Liberia, where his parents operated a school. But then life just sort of went on.

After graduating from high school, Kallay opted to come to Wright State to run on the cross country team. With 68 college credits already in his pocket, he graduated in May with a bachelor’s degree in marketing after only two years.

In the fall, Kallay will begin working on his master’s degree at Wright State in engineering innovation and entrepreneurship.

“I want to combine the engineering aspect of things with the business side. This is the perfect degree for it,” he said. “My goal is to be the CEO of my own company by the time I’m 30.”

Last October, as Kallay was cruising toward his bachelor’s degree, he read a newspaper report and was stunned by the estimated numbers of people in the United States who are taken into sex trafficking every year.

“So I said I’m going to do something that will inspire those around me to take action that will ignite a fuel to end this thing,” he recalled. “What do I love to do and how can I use that to create awareness? As a runner, I knew I had the ability to do long-distance endurance events.”

So at 10 a.m. on June 23, Kallay will push off from Wright State on his bike, connecting in Kentucky with the TransAmerica Bicycle Trail and then in Pueblo, Colo., with the Western Express Bicycle Route, which will take him to San Francisco.

With his brother following him in a vehicle filled with fruit, vegetables and water, Kallay will pedal about 10 hours a day and camp at night or stay in fire stations along the way.

“It will be tough once I get up into the Rockies, and it will be hot in Nevada,” he said. “I know physically that I’ll be able to get through it, but mentally I’m not sure. You’re riding 10 hours a day just staring out five feet in front of you the whole time. It will be a mental challenge. It will give me a lot of time to think, though.”

Kallay hopes to speak at churches along the way about the issue of sex trafficking. And he plans to post a daily video blog that can be viewed at IanKallay.com or on his Facebook page.

If all goes according to plan, Kallay will pedal across the Golden Gate Bridge 40 days after he departed from Wright State.

“I want it to be the beginning of a revolution—a ripple effect—for myself and others around me to start taking action,” he said. “I want to inspire others to know about this and be turned on to this cause and then go out and work with different organizations. I see myself as more of an instrument.”