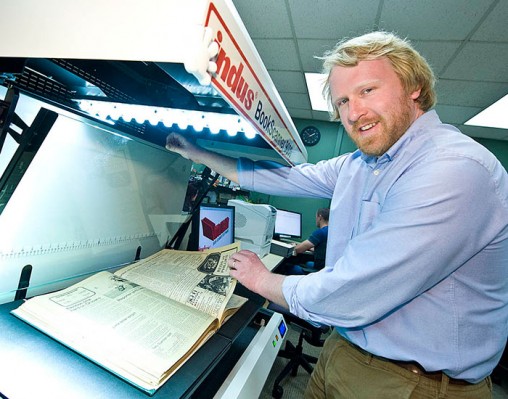 Digitization specialist Ryan O’Grady reviews an old issue of The Guardian in the Office of Digital Services, which is digitizing the newspaper's past issues for a new online collection.

Discussions about Wright State University’s name. Reports on the growth of campus. Students enjoying May Daze. Commencement ceremonies on the Quad.

Those are just a tiny sample of the topics you can now explore in a new online collection of early issues of The Guardian, the university’s student newspaper. 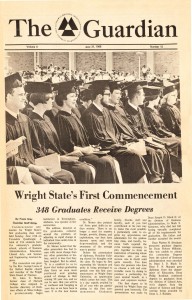 The June 31, 1968, front page of the Guardian marked a milestone in Wright State's history.

Chris Wydman, university archivist and records manager, said that although back issues of The Guardian have always been available from Special Collections and Archives, the online collection is a “real boon for research.” Patrons aren’t limited to the archives’ hours of operation and the newspaper collection is now full-text searchable.

“It’s a great outreach tool for our collections,” Wydman said. “It also helps preserve the original newspapers as the information can be accessed without pulling out the originals, which are sometimes in poor condition.”

The Office of Digital Services of the University Libraries is overseeing the project and worked with Wydman and current Guardian staff member Kegan Sickels to get the project underway. Digital Services, which is responsible for managing CORE Scholar, preserves, organizes and distributes Wright State’s scholarly and historical material.

“The biggest thing we’re trying to do is capture the scholarship of faculty, staff and students at Wright State and also local, regional and WSU heritage material,” said Jane Wildermuth, the head of Digital Services.

The first issue of The Guardian was published March 19, 1965. It includes articles on a new name for the university, which at the time was a branch of The Ohio State and Miami Universities; a proposal for a temporary student union; and an art exhibit by English instructor Don Willis. 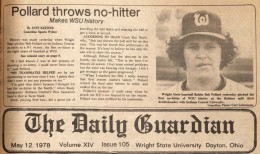 The project gained national attention when it shared a 1978 article on a no-hitter by musician Robert Pollard while he was a Wright State pitcher.

The newspaper project gained national attention earlier this year for unearthing a May 12, 1978, article on a no-hitter by Robert Pollard, a pitcher on the Wright State baseball team who would later form the Dayton rock band Guided by Voices.

Ryan O’Grady, a digitization specialist scanning many of the issues, came across the article and emailed a photo of the story to a friend who is also friends with the band. “It snowballed within a week,” O’Grady said.

The story of Pollard’s no-hitter, which was the first in the university’s history, went viral. It was shared widely on social media sites like Twitter and Instagram and was featured on ESPN’s website, Hardball Talk and various music sites. A Columbus clothing company even created a T-shirt with Pollard’s 1978 image from the newspaper.

“It was really neat just to see,” O’Grady said of the attention the story received. 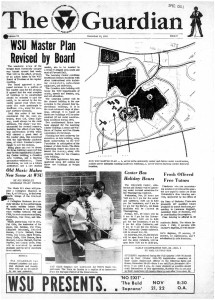 Wildermuth and O’Grady say it’s fun to go through the newspaper archives and learn more about what was happening on campus throughout the years, from political debates to parking issues to the famous bands that have performed at Wright State.

“To see the growth of Wright State through The Guardian is really interesting to people,” O’Grady said.

After each issue is scanned, O’Grady uses software to crop and rotate the images and do a quality check, ensuring the text isn’t faded and images are clear and bright.

The website houses faculty and student publications and scholarship, materials and videos from conferences, newsletters and academic journals, like the Best Integrated Writing: Journal of Excellence in Integrated Writing at Wright State University and the Journal of Bioresource Management.

Core Scholar also includes oral histories for the Boonshoft School of Medicine, the College of Nursing and Health and the Wright State Retirees Association and slides of works from past exhibitions at the Robert and Elaine Stein Galleries.

Digital Services works closely with the university’s Special Collections and Archives to digitize some of the archives’ materials, including Civil War letters and other ephemera from Ohio natives, oral histories from 1913 Dayton flood survivors, and materials from the Wright Brothers Collection.

In addition to adding scholarship from a number of Wright State departments, the office’s future projects include digitizing issues of a newspaper the Wright brothers published and the diary of their father, Milton Wright.

Recently, Digital Services digitized the Wright family album, which was begun around 1880 and contains portraits of members and friends of the Wright family. Patrons can now view the album on a flipping book to get a sense of what the physical leather-bound album looks like without handling the brittle pages.

Learn more about Wright State’s history through The Guardian collection on CORE Scholar and from Special Collections and Archives.

To learn more about Digital Service, visit CORE Scholar or contact Jane Wildermuth at (937) 775-3927 or jane.wildermuth@wright.edu.