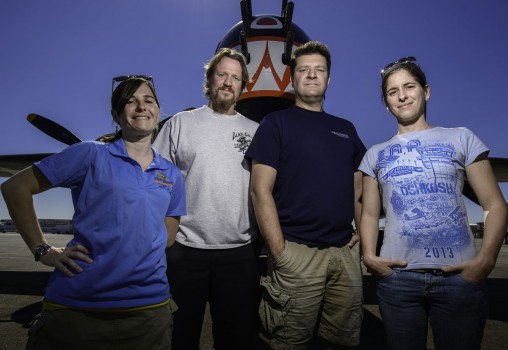 A Wright State film graduate takes viewers above the clouds in a new documentary series on vintage aircraft restoration.

Adam White, who graduated from Wright State in 1995 with a B.F.A. in motion pictures, is the director of “The Restorers,” a new documentary series about people who restore warbirds and antique aircraft. The series highlights the efforts to rebuild vintage aircraft, while providing history of those planes and their pilots.

“While the viewer will learn about what it takes to resurrect these aircraft, the plane projects are more of a vessel to tell the stories of the people behind the crafts, the veterans, pilots and ground crews from long ago,” White said.

The first season includes five one-hour episodes, each themed around a particular aspect of aviation restoration.

White will return to Dayton to screen an episode of “The Restorers” on Saturday, July 12, at 4 p.m., at the National Museum of the United States Air Force.

Jumpers dressed in period gear head toward a C-47 transport for their WWII-style jump the episode “Living History.”

The screening, in the museum’s IMAX theater, will feature the filmmakers and members of the cast, including World War II veterans Ralph Lynn, a B-24 copilot, and Jim “Pee Wee” Martin, who served in the 101st Airborne. They will talk about their experiences and answer questions.

The episode, titled “Living History,” features a group that reenacts the attack on Pearl Harbor, a B-24 bomber crew and a World War II Airborne demonstration crew.

The museum is screening a new episode of “The Restorers” every month through October. Episodes are shown daily at noon and 4 p.m.

“The Restorers” expands on White’s 2003 documentary of the same name. The film aired on PBS and won a regional Emmy.

As White worked on the film, it became clear that there were more stories to tell, he said.

“Even while making that original doc, I knew it needed to become a series, with just too many stories about airplane restoration to fit into just one hour,” White said. “It took me awhile, but we are now creating the series ‘The Restorers.’”

White and his wife, Kara Martinelli, who is series’ producer, are currently talking to distributors about the television series. Once the series is sold, they will work on season two, White said.

Since graduating from Wright State, White has worked as a freelance cameraman and lighting tech in the film industry. He and Martinelli operate Hemlock Films, a production company in Cleveland specializing in aviation cinema.

White and Martinelli have also won Emmys for “Red Tail Reborn,” about the Tuskegee Airmen.

Their latest film is “Beyond the Powder: The Legacy of the First Women’s Cross-Country Air Race,” a documentary following two women air racers in the 2014 Air Race Classic, which mirrored the first women-only Air Race in 1929. It currently is in production.

Watch a trailer and learn more about “The Restorers” on the series’ website.

More information on screening at the Air Force museum is available on the museum’s website.