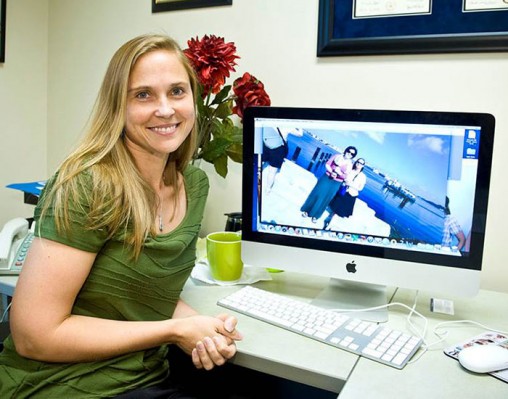 Gina Oswald, director of the Rehabilitation Services and Transition To Work endorsement programs at Wright State, spent a week in Havana with a national delegation exploring disability services in Cuba.

It was a rare peek at how Cuba provides for its citizens with disabilities.

Gina Oswald, director of the Rehabilitation Services and Transition To Work endorsement programs for Wright State’s College of Education and Human Services, spent a week in Havana with a national delegation to explore the Caribbean nation’s health and rehabilitation system.

For Oswald, it was an educational adventure that included meetings with a blind professor, an urban planner, deaf schoolchildren and even researchers working on a cancer treatment that involves the use of venom from scorpions.

“Things are done very differently there, but they are just so creative,” Oswald said. “And they have this very different philosophy about things. They are a socialist country, so it’s more about the whole. They say what’s good for the community is good for all of us. Solidarity.”

Oswald grew up in Canton, Ohio, and obtained degrees at Kent State University — a bachelor’s in history and psychology, a master’s in rehabilitation counseling and a Ph.D. in special education with an emphasis in rehabilitation and transition.

She worked for the State of Ohio doing vocational rehabilitation for people with disabilities and then at Kent State, bringing high school students with disabilities on campus to learn job skills. She took her first faculty position at Maryville University in St. Louis before arriving at Wright State in 2011.

“If you’re going to focus on disability, accessibility, employment and things like that, Wright State is just one of the best places to be because of the accessibility and because we’ve had such a rich history of disability culture,” she said.

At Wright State, Oswald has helped undergraduate and graduate students learn to work with individuals with developmental disabilities such as cerebral palsy, autism and Down syndrome to successfully transition into the workplace.

The May trip to Cuba was organized by the Council on Rehabilitation Education and the University of Memphis as part of a larger effort to more heavily focus on international rehabilitation efforts and create a directory of rehabilitation professionals around the globe.

“Rehab is so different around the world, and it’s different people providing different services,” Oswald said. “If I want to work with someone in Peru, where do I start? By starting a directory, we’re reaching out to other places if we want to get connected or we want to network and collaborate.”

The 19-member delegation to Cuba included Oswald and faculty members from Penn State, the University of Honolulu, University of Memphis, Clarion University, University of Washington, Central Connecticut State University and other universities. In addition, there were researchers, physicians, social workers and community activists.

But the trip was mostly business.

There was a stop at a community mental health agency, where the delegation witnessed art therapy and community outreach. They learned that family doctors and small-town practices are a big part of Cuba’s health care system.

Oswald met with a blind professor and discussed his accommodations and how he navigates his world. She met with an urban planner to discuss housing and saw disability/accessibility features in bathrooms, ramping systems and different types of wheelchairs in use. When she visited a school for the deaf and hard of hearing, she met with children with cochlear implants who were using assistive technology to learn how to speak.

Oswald was asked about the U.S. health care system, about assistive technologies for the deaf, how computer software is used and what populations are taught sign language.

“We’re starting to teach little kids because they can use sign language before they can talk and we are using it with people with Down syndrome who may have difficulty with speech,” she said.

Oswald learned that every community in Cuba has a delegate to the government who helps people with disabilities get services and jobs.

Now back at Wright State, she plans to step up community outreach in her program and be more strategic about helping communities.

“What I took away was this whole concept of if you make the community better, it’s going to help everybody,” she said. “In rehab, there is a heavy emphasis on working for the individual, and I think that’s very important. But if we reach out to the communities, the communities will reach back to us and want to integrate people with disabilities.”