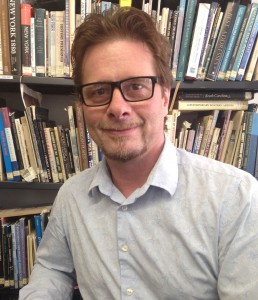 That’s because Fahrer, who graduated from Wright State in 1989 with a B.F.A. in Design/Technology, won two Emmys in the same category: for outstanding achievement in Art Direction/Set Decoration/Scenic Design in a drama series. He was nominated twice for his work as art director on “All My Children” and “One Life to Live,” and received the same number of votes for both nominations.

He said it is unheard of for one designer to win two Emmys in the same category.

“I tied with myself in the nominations and the Emmy Awards,” he said. “I wasn’t expecting to receive one, much less two, [Emmys].”

The Emmys were the fifth and sixth of Fahrer’s career. He also received Daytime Emmys for outstanding achievement in Art Direction/Set Decoration/Scenic Design for the children’s show “Between the Lions” in 2001 and for the drama series “All My Children” in 2003 and 2009 and “One Life to Live” in 2007.

As a student at Wright State, Fahrer majored in set and lighting design. Prior to enrolling at Wright State, he studied theater at Wilmington College in Wilmington, Ohio, where he’s originally from. He received an M.F.A. in design from New York University.

Fahrer remains in New York, where he has worked as a set designer in television, theater, music videos and commercials. He’s worked on numerous projects for MTV, VH1, PBS, HBO, Nickelodeon, NBC, CBS and ABC.

For the last 10 years, Fahrer worked as art director on “All My Children” and “One Life to Live.” As soap operas have gone off the air or moved to Los Angeles, he’s focused more on freelance set design.

He recently finished production on the new “Annie” movie and is currently working on “Peter Pan Live” on NBC.

Fahrer said he likes that his job allows him to turn his ideas into something real. “To physically be able to walk through something you’ve imagined is amazing,” he said.

He credited the Wright State Theatre Program for teaching him how to design and understand how to work as a designer in the real world.

“One of my best decisions ever was to go to Wright State,” Fahrer said, “to get that experience painting, being a scenic artist, then being in a studio with [former faculty member] Joe Tilford for six hours a day. That was our studio senior course and it really taught me how to design and how designers work, how to have self-discipline.”