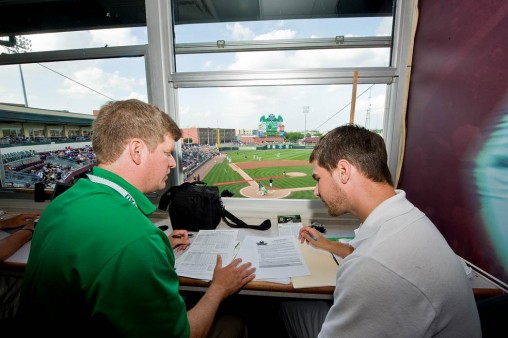 It is a sultry summer night at Fifth Third Field, home of the Dayton Dragons. The press box is alive with broadcasters, newspaper reporters, photographers and . . . researchers.

Assistant Wright State University professor Scott Peterson and communication student Sam McLain are there to take the temperature of minor league baseball and how media coverage of it is changing.

“Is the newspaper sending a full-time writer to every game to cover it or are they just using reports from the Web that teams post?” Peterson said. “I’m trying to get a sense of how sports journalism is being practiced today, especially in response to changes brought on by the Internet.”

Peterson joined the faculty in the Department of Communication at Wright State last fall. He received his interdisciplinary Ph.D. from the University of Maine by combining sport literature, sports history and journalism history.

As part of his research project, he plans to compare the coverage in Dayton with that of other towns and cities that play host to Class A baseball teams. He has already been to Ft. Wayne, Ind., and plans trips to Beloit, Wis., and to Iowa, with stops in Clinton and Cedar Rapids. 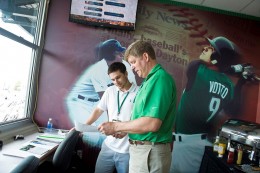 Communication professor Scott Peterson is traveling to minor league baseball stadiums around the Midwest, including Fifth Third Field, home of the Dayton Dragons, for his study.

“I want to travel to the other Midwestern towns and see for myself what sort of attendance they are getting and go to the local media to try to get a sense of how much is invested on their part,” he said.

In addition to crunching numbers and interviewing sportswriters, editors and TV reporters, Peterson plans to attend the games to get a real feel for the players and the communities.

“It’s important to be here to see the players, to see what they can do, as opposed to just relying on the statistics,” he said.

With the explosion of the Internet, newspaper readers no longer have to wait for the newspaper to publish or post online stories to get the latest on their favorite teams. A click of the mouse gives them immediate Web updates on games — including video — posted by the teams themselves. In addition, sports bloggers and tweeters provide updates in real time.

“Social media, in particular, is changing the way we cover sports,” Peterson said.

Seven to 10 years ago, local sportswriters would travel with minor league teams and do live reporting on their away games.

“Now it’s unheard of,” Peterson said. “There has been a very dramatic shift.”

Peterson is analyzing the quantity and types of coverage, especially what media outlets report about the players, whether it be small mentions or larger feature profiles. Heavy coverage is an indicator that the team is integrated into the fabric of the community, he said.

Sam McLain, a communication major from Xenia, is helping Peterson with his research. He has cataloged all of the Dragons stories in the Dayton Daily News so far this season, listing the author, date, size of story and whether or not there were photos.

McLain is also writing columns and game stories to build a portfolio.

“I’ve always thought about working for the Cincinnati Reds,” he said. “I like to write, and I enjoy media relations.”

Peterson, who hopes to get his research published, is also investigating the economic and social role teams play in their communities.

“Social in the sense that it’s something for young families to do, bring their kids out to the ball game,” he said. “There is also community involvement with team parents who get involved and house and help the players.”

In addition, Peterson is trying to quantify the number of dedicated diehard fans.

“I want to find out how many of those fans there are and see how much it means to them,” he said.

Peterson also wants to see if support of minor league baseball in some places is falling off.

No danger of that in Dayton.

Every home game in the Dragons’ 15-year history has been a sellout, beginning with the inaugural opening night April 27, 2000. The Dragons broke the North American record for consecutive sold-out dates on July 9, 2011, when they reached their 815th straight sellout, eclipsing the previous record held by the Portland Trail Blazers of the National Basketball Association from 1977 to 1995. On May 10, the Dragons completed their 1,000th consecutive sellout.

“Dayton is very unique in that they have up to 8,000 fans and more showing up for games,” Peterson said. “Why is it working so well here and what is the media’s role in that? Can this model be taken to other towns, where attendance is low?”