3-D asterisks designed to mimic the firing of the brain’s neurons by creating complex, shifting patterns of light and shadow are part of a planned art installation that promises to inspire scientists, engineers and medical researchers who will work in the new Neuroscience Engineering Collaboration (NEC) Building on Wright State’s campus.

The installation is called “Dial” and it was created by Erwin Redl, an Austrian-born artist currently based in Bowling Green, Ohio. 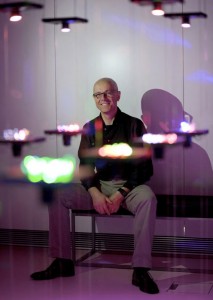 Erwin Redl, an artist in Bowling Green, Ohio, created an art installation that will be featured in the new Neuroscience Engineering Collaboration Building.

Dozens of dials will be arranged in a diamond grid on the west wall of the atrium in the NEC Building, which is scheduled to open in March 2015. Consisting of eight extremely bright LED lights arranged equidistantly in a circle around a center pole, the dials will point toward the pole casting its shadows. The lights of each dial will be animated sequentially causing the shadow to rotate 360 degrees.

By offsetting the start of each of the 90 dials or operating different dials at different speeds, synergy between the individual dials emerges and produces complex large-scale patterns that will perpetually shift.

“My media are space and time,” said Redl. “I am interested how our perception is shaped by the space that surrounds us and the changes of that space over time.”

This isn’t the first appearance Redl’s art has made at Wright State. In 2009, the Robert and Elaine Stein Galleries hosted one of his impressive LED light installations.

Redl was commissioned to create “Dial” for Wright State by winning a competition sponsored by the Ohio Percent for Arts Program, legislation that provides funding for works of art for new or renovated public buildings.

The law requires that 1 percent of the total appropriation go to artwork for any public structure receiving more than $4 million in state funding. Since its establishment, the Ohio Percent for Arts Program has brought public art to areas, large and small, throughout Ohio.

Much of Wright State’s eclectic collection of public art was brought to campus by the Ohio Percent for Arts Program including “Turning Points,” the twisting red sculpture near University Hall. 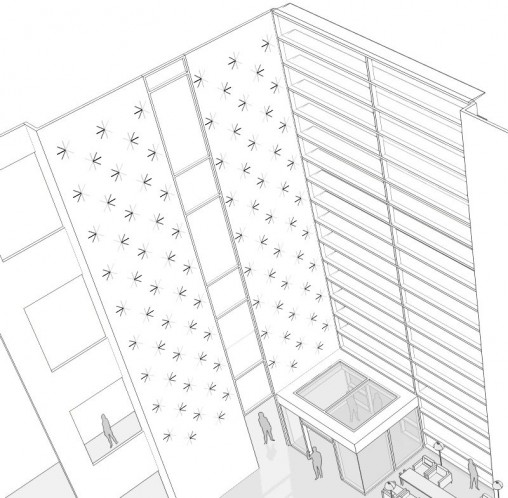 Redl said much of his art is inspired by the natural world.

“I am especially influenced by the long cycles in nature and how complex patterns and rhythms evolve out of simple interactions between individuals acting in large groups,” he said. “An example of this would be a flock of birds or a school of fish in formation. This lead to my fascination with underlying structures of specific processes.”

Redl hopes his installation becomes a symbiotic component of the NEC Building’s architecture — a part of a spatial whole. He believes the scientists, engineers, neurologists, fellows and medical students that frequent the NEC Building will look up at the moving patterns of “Dial” and feel inspired to discover something new about the patterns that occur in each of our brains.

“With research being done on neural networks and neuron firing patterns, the installation will certainly be a point of discussion and hopefully be inspiring,” said Redl.