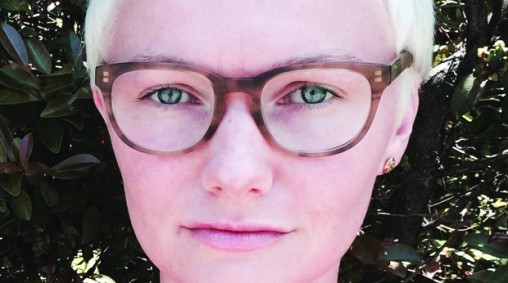 Movie screenwriter and Wright State graduate Nicole Riegel has been named by Filmmaker magazine as among 2014’s “25 New Faces of Independent Film.”

Filmmaker is a quarterly print magazine and daily-updated website covering the art, craft and business of independent film. The “25 New Faces of Independent Film” were chosen by Filmmaker editors over the past year.

Wright State professor emerita Julia Reichert, whose films have been nominated for Academy Awards, said the magazine’s “25 New Faces” honor is much anticipated and talked about in the world of independent film.

“This is quite a big deal,” Reichert said.

Reigel graduated from Wright State in 2009 with a bachelor degree in motion pictures. She then enrolled in the University of California-Los Angeles’ master of fine arts writing program, where she honed her screenwriting skills.

Riegel said she came alive as a writer at Wright State’s Directing Lab, a 92-seat theater available to students who want to rehearse or present their own theatrical productions.

“It’s the space where I tested, wrote and rewrote a lot of the work that I’m actually making now and that got me into UCLA graduate school,” she said. “Every production was a labor of love. And since there was no money involved, it forced us to be rich in creativity.”

The film “Dogfight,” begun while Riegel was still at UCLA, is her breakthrough script, according to Filmmaker. The magazine calls it a riveting tale of two brothers, an older one who has escaped society by joining a meth-producing backwoods cult and the younger one bent on bringing him back.

“It’s very much a valentine to the kids I grew up with in the Midwest,” she told the magazine. “Jo [the younger brother] — I was very much that kid, the kid who spoke out.”

Riegel told Filmmaker that everything she writes is about people whose lives are shaped by war and violence, which ultimately challenges them in some way.

Riegel, who hopes to direct one day, is currently juggling multiple scripts, including a war story about brothers set in Afghanistan, a dystopian sci-fi thriller and the true story of captured Army soldier Jessica Lynch.

“She is this reluctant hero who came of age between two raging wars she didn’t completely understand and was thrust in the limelight of being a poster girl,” Riegel told Filmmaker. “At the time, a lot of people in the military hated her because she wasn’t the lionized violent heroic feature they wanted her to be. I remembering watching her on TV and thinking, ‘Why isn’t telling the truth heroic?’”

Riegel said the Directing Lab at Wright State taught her a crucial lesson about working full-time in the arts.

“You can’t wait for someone to offer you a job or give you permission to do what you love — you have to create the job for yourself,” she said.