Going Up: New elevator signs to encourage priority for students with disabilities 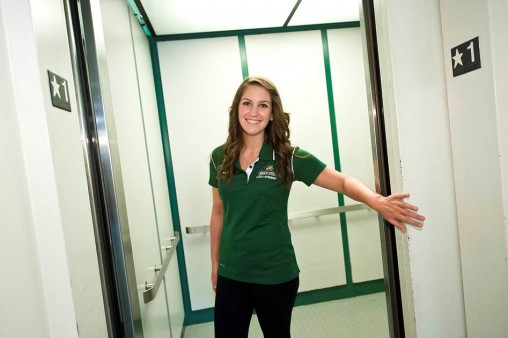 As director of disabilities for Student Government, Megan Gillespie led an effort to design signs encouraging elevator riders to give priority to students with disabilities.

It really hit home after she tore up her knee, had reconstructive surgery and found herself in a leg brace and on crutches. For Wright State student Megan Gillespie, getting on an elevator to make a class was a real problem if able-bodied students wouldn’t make way for her.

As director of disabilities for Student Government, Gillespie had become aware of the issue when the previous director—who uses a wheelchair to be more independent—complained of being late for classes when students without mobility challenges would step ahead and leave no room for him on the elevator.

Now Gillespie was living it too—although not on a permanent basis, as many students with disabilities do. 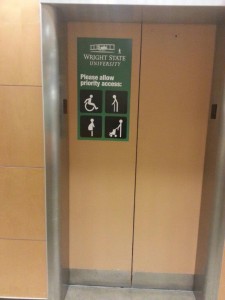 Elevator signs like the one seen here are going up across campus, encouraging the campus community to give priority elevator access to people with disabilities as well as to the elderly, pregnant women and people with small children.

“I think the community is kind of oblivious to things like that. They’re just not aware that other people might be limited to things that they’re not limited to because they don’t deal with that on an everyday basis,” she said. “It’s just really about being considerate and realizing that everyone is different.”

As a result of efforts by Student Government, elevator signs are going up across campus, encouraging the campus community to give priority elevator access to people with disabilities as well as to the elderly, pregnant women and people with small children. The decals will go on 20 to 30 of the most heavily used elevators.

“We want to make this very noticeable for able-bodied people,” said Kyle Powell, president-elect of Student Government. “This doesn’t mean you can’t get on the elevator. It’s just to make you think about it before you do.”

He said some students who arrive at Wright State may for the first time be interacting with students with disabilities or mobility issues and are not sure how to conduct themselves.

“It’s eye-opening to them in a lot of ways,” Webb said. “There has got to be some push for awareness there.”

Wright State has a national reputation for providing access to people with disabilities. It has an extensive tunnel system, a park dedicated to service dogs and has been named among the top disability-friendly universities in the United States in a book designed to help disabled high school students select a college.

Gillespie said the elevator signs are another example of how Wright State embraces its diversity and meets students where they are experientially to get them to the finish line.

“I feel it shows that we’re growing as a school and a community,” she said. “It will make more students want to come to Wright State because we are so inclusive.”