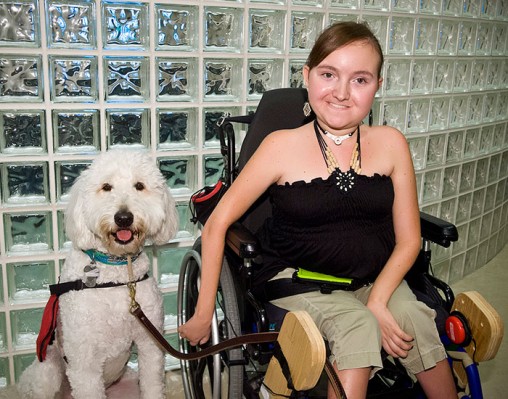 Not many people know Morse code these days. For most, it’s an obsolete form of communication that pales in comparison to telephone calls, texting and instant messaging.

But for one Wright State student, Morse code has become a powerful tool that helps her become more independent.

Senior rehabilitations services student Mallory Holler has begun learning the code, enabling her voice to be heard like never before.

“Morse code can allow a person with very little, but enough movement, to type and do other things on the computer,” Holler said. “My system is amazing — it’s allowing me to do so many things I needed help with previously.”

Morse code is a system of dots and dashes that can be transposed into letters. The dot-and-dash signals are arranged in specific orders and timings so that words can be formed.

It sounds easy to use, but for Holler, nothing is that simple.

For her entire life, Holler has had to get creative with how she communicates. She was born with Rosenberg Chutorian, an extremely rare syndrome that is characterized by hearing loss, degeneration of the optic nerve and neurological abnormalities. Today, Holler is legally blind and deaf and moves around with the help of a motorized wheelchair and a service dog named Sparrow.

“Using this Morse code system along with the other system of 12 switches has allowed me to type, send emails and reply to emails and open documents independently for the first time in my life,” said Holler, who communicates with her peers, professors and assistants regularly.

“I’m still experimenting and learning new things about the code every day,” she said. “It’s all really exciting.”

Holler is currently learning the dot-dash combinations that enable her to use her computer mouse to better navigate her virtual interface. She says she looks forward to the day when she can use Facebook with Morse code.

She first tried using Morse code technology when she was in elementary school to help her on spelling tests and dictation. But the technology was too clunky then and not worth the extra effort.

Tom Webb, director of disability services, has been one of the driving forces in getting students with disabilities to utilize new technologies. Holler has sent a number of messages to him through the use of Morse code.

“This is a prime example of how assistive technology can be the great equalizer for our students with disabilities in their academics, social and employment settings,” said Webb.

Holler hasn’t let her Rosenberg Chutorian syndrome slow her down.

Five years into her college education, she has accumulated a vast group of friends, excelled in all of her courses, has been immensely active in the community and campus organizations and her ambition has skyrocketed.

When she first came to Wright State in 2010, Holler immediately felt at home.

“When I was still in high school and first came to tour Wright State’s campus, I met so many inspiring people with disabilities,” she said. “I didn’t know I would soon become friends with so many of them.”

Holler was also taken with the kindness of the Disability Services staff. She recalls how effective the staff has been in helping students with all types of disabilities.

“I knew right away that I wanted to go into rehabilitation services,” Holler said. “Like the staff in the Office of Disability Services does, I want to help others find their path to success.”

And that’s exactly what she plans to do upon graduation. Holler said her future will be spent paying forward the help and kindness she has been shown. When she leaves Wright State, she will begin pursuing a career in the disability rehabilitation field.

“One of my life goals is to help invent or develop new assistive technologies to help people with disabilities succeed in all they do,” said Holler. “I’ve realized that it’s important to never give up on what you do, because I believe that failure teaches us to do things in a better way.”