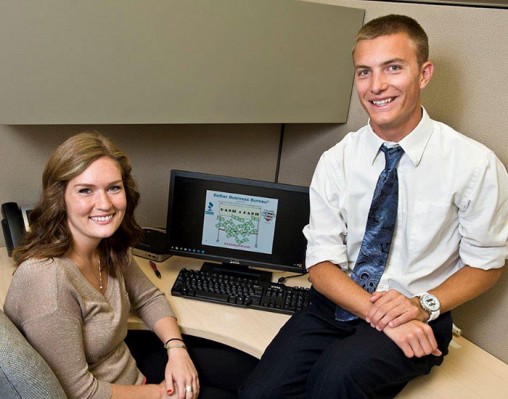 Dash 4 Cash — a wild scramble to solve clues during stops at downtown shops, restaurants and other businesses — was conceived and developed through a public relations class project in the College of Liberal Arts. David Cobble, who was in that class, and Kacie Klarer are working as unpaid interns for the Better Business Bureau serving Dayton and the Miami Valley.

Cobble, who grew up in Blanchester and now lives in Huber Heights, came up with the Dash 4 Cash idea. It emerged from a semester-long project of a public-relations class in which students broke up into groups to form PR firms that included Cobble’s Thunder Punch firm.

“The group loved it, so we went from there,” Cobble said. “Watching this little idea from a class be brought to life is awesome.”

Sponsored by the Downtown Dayton Partnership, Urban Nights is a street party and open house that showcases the city center’s dining, nightlife, art, music, retail and urban living options. Businesses offer discounts, art galleries open their doors and entertainers perform. The free event is held once in the spring and once in the fall.

“We are huge supporters of downtown,” said John North, president and CEO of the BBB. “We love the kind of attention that Urban Nights brings to downtown.”

The BBB reached out to Wright State for help in raising its profile and becoming more relevant to the millennial generation.

There are an estimated 80 million millennials, born between 1980 and 1995. Known as the new breed of American worker, the millennial generation has developed a reputation of being tech-saavy multi-taskers.

“Millennials have an incredible amount of buying power of their own, but also influence their parents’ buying power,” North said.

He said Urban Nights exposes millennials to products and services that are available downtown and gives businesses a chance to interact with them in a fun way.

“I hope they hear the message of downtown and also realize the importance your Better Business Bureau plays and will reach out to us,” he said.

Dash 4 Cash is modeled after CBS-TV’s “The Amazing Race,” a reality game show in which teams of two people race around the world in competition with other teams.

“We’re going to have people follow hashtag #bbbdash4cash and include pictures throughout the race,” Klarer said.

Klarer hopes to work for a nonprofit after graduation.

“I feel like I’ve taken a lot away from this because I’ve had to research hashtags and figure out how we can attract millennials,” she said.

The goal of Dash 4 Cash is to have 30 teams of four contestants who make 10 to 12 stops. Destinations will include restaurants, gift shops, banks and other downtown businesses.

Teams will start the race at Dave Hall Plaza at 6:30 p.m. and be sent in different directions so they can’t follow each other and overwhelm the businesses. The businesses will provide a clue that must be solved or a game that must be successfully completed before the teams can move on to the next stop.

One restaurant, for example, may give the teams a description of a specific customer who must be located.

All profits will go to the Ronald McDonald House of Dayton, which provides a temporary home-away-from-home for families of critically ill, hospitalized children.

Cobble said he enjoys planning fundraisers and other events.

“Even after I come down to the BBB for five hours, I go home and am still playing around, trying to come up with things, ideas and clues,” he said. “So, for me, it doesn’t seem like a whole lot of work.”

Sheri Sword, the BBB’s vice president of communications, said Cobble and Klarer have helped take the BBB, which has a staff of 25, to a higher plane.

“They have brought a new level of awareness of how we communicate, offered some innovative ideas that we probably would not have thought of,” said Sword, a Wright State graduate in organizational communication.

Sword said the students come to work whenever they are needed, stay late when necessary and do whatever needs to be done.

“Their passion and their drive and their work ethic are outstanding,” she said.

After graduation, Cobble wants to go on for his master’s degree and then get a public relations job, hopefully at a BBB.

“I kind of found my place here,” he said.

Learn more about Dash For Cash at bbbdash4cash.org and Urban Nights at  downtowndayton.org.