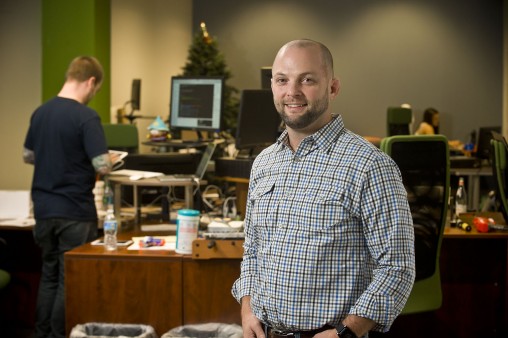 Barry Besecker, a 1995 Wright State graduate and CTO of Marxent, which created scholarships for female engineers and computer scientists at Wright State.

Marxent Labs seems like a pretty cool place to work. Resting on each desk within arm’s reach is a brightly colored Nerf gun. And beckoning from one side of the office are Atari Asteroids and Millipede video games.

But it’s hard to believe the workers here take much time to relax. The rapidly growing Beavercreek-based company creates jaw-dropping, augmented-reality computer apps that are being used around the world. And it has doubled in size — to 45 workers — since Jan. 1.

But Marxent is in need of female engineers and computer scientists.

So the company is funding full-tuition scholarships at Wright State University to encourage women to pursue careers in computer vision and related fields.

“We’ve been successful in attracting super team members to Dayton from all over the country, but we’ve had very few female applicants for engineering roles,” said Barry Besecker, co-founder and CTO. “We want women interested in gaming and computer science to know that there are awesome local jobs waiting for them upon graduation. Wright State was immediately on board with our vision on how to make it happen.”

This year, the Marxent WSU Scholarship for women in engineering will go to a junior female student, who will be able to renew it next year. A second student will be awarded a scholarship next year, with two students on Marxent scholarships annually going forward.

The students, who will also be given a chance to intern at Marxent, must show a demonstrated interest in software development and a passion for gaming, computer vision, 3D animation and other emerging technologies.

Besecker said a diversity of views is necessary to conceive and design products and that women can bring a unique perspective. 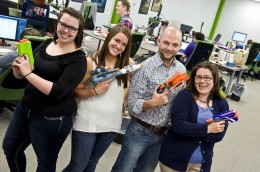 Besecker graduated from Wright State in 1995 with a bachelor’s degree in math. He founded Marxent in 2011 along with his brother, Beck, the CEO who heads up marketing and sales in the company’s St. Petersburg, Fla., office. Marxent is short for “marketing-times-entertainment” and a name that pops up on the first pages of a Google search.

“We decided to focus on the mobile space — building mobile apps — because it was getting really hot and continues to be hot,” Besecker said. “We built a couple of different ecommerce-based mobile apps, and that’s where we really broke into augmented reality, doing an application for Moosejaw Outfitters.”

In augmented reality a camera on the mobile device leverages computer vision where sophisticated algorithms processing each frame from the video can detect things in real space. It enables 3D models and images and animations to interact with those things in the real world, bridging the divide.

“You’re taking reality and you’re augmenting it with things that are virtually there,” Besecker said. “So you can think of it as virtual reality and real reality coming together.”

The effect is that images fly off the screen, immersing the viewers and giving them the sensation of being able to reach out and touch the products. For example, Marxent created an iPad app for AZEK Building Products that enables potential customers to see porches, decks, railings and paver layouts of all different designs and colors.

Besecker said market applications are limitless and range from gaming, manufacturing, fashion and marketing to medical, entertainment and education. And Marxent’s market has been exploding, with more and more brands calling the company for help directly.

Marxent doubled one company’s business after it produced an app that enables customers to look at 3D images from a company catalog. It also created an augmented-reality game for Speedway in which users look at a fountain drink cup through the app and try to catch ice cubes.

In addition, Marxent built an app for the Science Olympiad to promote neuroscience research being done at Wright State. The app is a stylized 3D image of a floating brain that displays information that corresponds to parts of the brain that are touched.

The workers in Marxent’s Beavercreek office include 3D modelers, animators and game developers. Pinned to the walls are posters of sci-fi movies such as “The Matrix” and “Tron.” The arm of one worker is entirely covered with tattoos of video-game characters.

“We’re all into movies, games and superheroes here,” Besecker said. “It’s a lot of fun.”

Besecker said its culture makes Marxent a special company. Workers are broken down into four-to-five-person, cross-functional teams that can work very fast.

“Nothing replaces us all standing around a table making commitments to one another about what we’re going to get done that week,” he said. “We don’t have cubes; we all talk to each other and work together and shoot Nerf guns at each other. It’s something new and something fun every day.”

“While it seems like programmers might be propeller heads and logic oriented, I think most people are attracted to the world of computers by the opportunity to create with no limits,” he said. “That’s the way computer science should be marketed.”

Besecker said Marxent employees are mastering new programming languages and becoming national thought leaders in some of the new fields. He said a Marxent employee gets as much as five years’ experience in the time a normal worker would get one.

The company plans to further increase its workforce, so it needs a steady pipeline of engineers and computer scientists. Interns work like full-time employees during their senior year and often get offered a full-time job after graduation. There are currently two interns and three full-time employees from Wright State.

“Living in a virtual-reality world is going to become a thing of the very near future,” Besecker said. “If you like science fiction, this is a very exciting time because it’s actually starting to become real.”