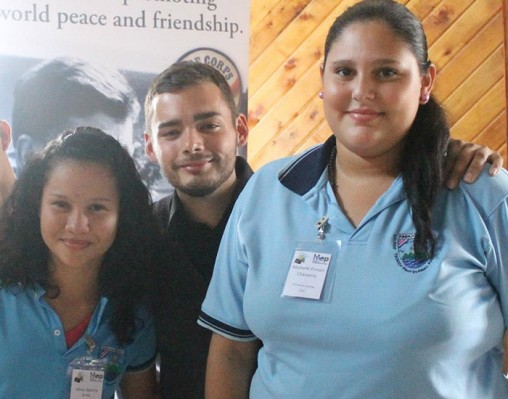 Carl Weitz, who earned a dual degree in international studies and Spanish from Wright State, spent more than a year in Costa Rica with the Peace Corps.

Weitz earned a dual degree in international studies and Spanish from Wright State in 2011. He lived and worked in Costa Rica from February 2012 through May 2014.

“The Peace Corps is a great experience in the sense that it provides its volunteers with such a vast array of opportunities,” he said. “I have gained experience in so many unique fields that now I know what I kind of work I like to do and what kind of work is tedious.”

Weitz also created an English lab for high school students and helped five teachers obtain higher scores on the Teacher of English for International Exam, which increased their pay.

Still, his greatest pride is in the relationships that he fostered.

“As much as I love to ‘work,’ my projects are meaningless without the people that have mentored and guided me during my service in Costa Rica,” Weitz said. “My colleagues, community members and students have meant everything to me. More than anything, they have given me the opportunity to thrive as a volunteer and represent the U.S. in the most humble way possible.”

This fall, the 25-year-old Weitz began pursuing a master’s degree in peace building and conflict transformation at the School for International Training Graduate Institute in Brattleboro, Vt.

Costa Rica, though, will always be with him.

“I feel like Costa Rica is part of who I am,” he said. “I will miss the daily teaching classes, sweating all hours of the day, the abundance of wildlife. The little things are what I will miss most.”

There are currently 120 volunteers in Costa Rica working in the areas of youth and community development and English education. During their service in Costa Rica, volunteers learn to speak Spanish. More than 3,500 Peace Corps volunteers have served in Costa Rica since the program was established in 1963.

President John F. Kennedy established the Peace Corps in 1961 to foster a better understanding among Americans and people of other countries. Since then, more than 215,000 Americans of all ages have served in 139 countries worldwide.