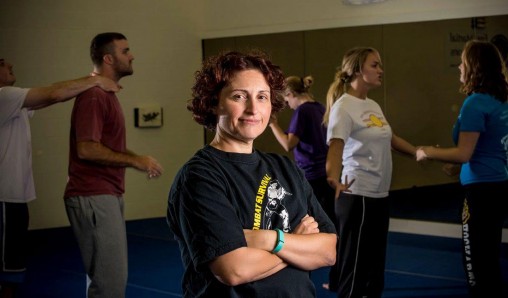 She has a soft spot for students. But don’t call Giovanna Follo soft.

The assistant sociology professor at Wright State University’s Lake Campus is a third-degree black belt, so accomplished in the martial arts that she is considered a sensei, a teacher.

And Follo is sharing her hard-won knowledge and skills with the students she passes on the way to class by teaching self-defense classes at the campus YMCA.

Specifically, she teaches Commando Krav Maga, a self-defense system developed from the Israeli military, and a variety of martial arts that features techniques designed to disarm and elude attackers. Follo decided to teach the techniques after she got tired of hearing about college students around the country being assaulted on campuses.

“There are things that can at least give you a better chance,” she said.

Classes are a ballet of strenuous physical activity. Choke holds are broken. Plastic guns and plastic knives are separated from the attackers.

Student Victoria Jobe, a psychology major from Dayton, is taking the class because she is living away from home on her own and wants to be able to protect herself.

“Dr. Follo teaches you that it doesn’t matter how big the other person is or weighs; you don’t have to be a big person to defeat a big person,” said Jobe.

Joey Schulte, a master’s degree business major from Wilmington, Ohio, said he was amazed at the simplicity of Commando Krav Maga.

“Just after six classes, if someone were to choke me I would automatically go into exactly what we’ve been practicing and be able to extricate myself from the situation,” he said. 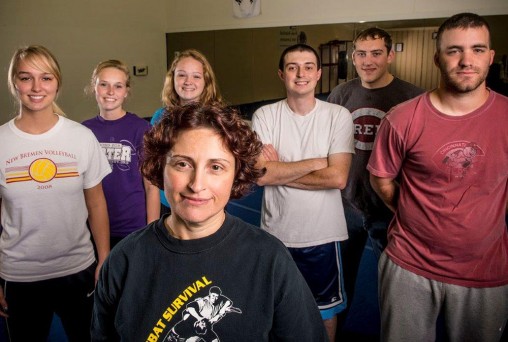 Follo has studied several different types of karate, teaches Commando Krav Maga and plans to write a book on women in martial arts.

Follo grew up in Chatham, Ontario, Canada, across the river from Detroit. Her parents immigrated to Canada from small towns near Naples, Italy, in the mid-1960s. Her father was a bricklayer.

Follo attended the Chatham Collegiate Institute, a public high school known for its strong scholastics. She was a self-described “TV-holic” who watched serious talk shows such as “Donohue” to the more frivolous.

“I was that person who on Saturday night at 11 p.m. was watching all of those Chinese-dubbed kung fu movies,” she said. “I loved them all.”

During her first year of college at Western University in London, Ontario, a friend invited Follo to a martial arts class.

“I lifted weights all through high school, but I never quite found that sport niche,” she said. “However, when I went to martial arts, it was really just me. I remember being a white belt and going to a tournament and winning. This was something I could do.”

Follo studied several different types of karate and would barrel through her opponents. Her passion for the sport even colored her studies. Her undergraduate thesis topic was women in martial arts.

Follo joined the faculty at Wright State in the fall of 2013.

Her class on the sociology of food touches on issues such as food security, genetically modified food and poor people’s accessibility to healthy food. End-of-life pain management and quality of life are addressed in her death and dying class.

Follo, who lives in Fort Wayne, Ind., with her husband and two sons, ages 4 and 2, is working on a book about teaching sociology with visual media.

“Wright State gives me a lot of leeway in terms of research,” she said. “It allows me to think outside of the box.”

Follo also intends to write a book about women in martial arts.

“When you give women self-defense, when you give women martial art they can rely on, they now can release themselves from this victim role and be their own protector,” she said. “They can really have that self-confidence and empowerment.”