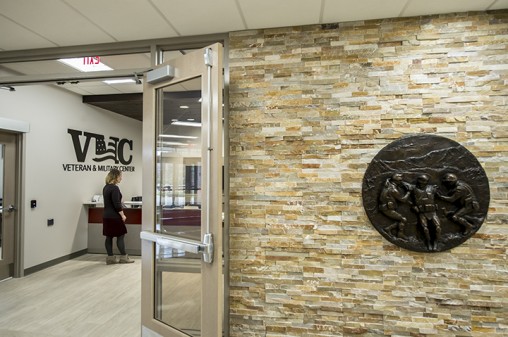 The rock facade of the Veteran and Military Center will feature five bronze medallions — one for each of the five branches of the U.S. armed services.

Tasked with designing the new Wright State University Veteran and Military Center (VMC), Seth Gordon hosted an intense design and planning activity known as a charette last spring. Determined to get invaluable feedback from the people who knew what they needed best, Gordon included 27 veterans in the activity. He wanted the space to reflect both the university’s military friendly reputation as well as the critical needs of a unique population of students. But what would they want?

The answer now lies at the intersection of Allyn and Millett Halls on Wright State’s Dayton Campus. The stone façade and large bronze medallions — which represent each branch of the U.S. armed services when completed — create an unmistakable atmosphere that has changed the face of the corridor in which it resides.

Designed to be service friendly and support driven, while providing space that’s hands-off and separate from the general population and VMC administration, the new center has a wow factor that’s off the charts. 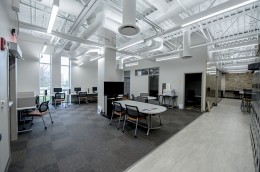 The 1,800-square-foot student center features a space for both collaborative and independent study.

The center was officially opened Nov. 13.

When asked what this new center says to them, students said:

“It says that Wright State cares.”

“It says Wright State is putting forth the effort to take care of veteran and military students.”

“It says thank you for your service.”

With 4,500 square feet and about 1,800 feet dedicated specifically for a student center, the VMC was designed to be a space where veteran and military students could efficiently get the support they needed to process their benefits but also relax and study in a place where they could mix with fellow veterans. 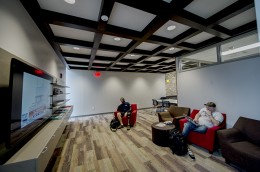 The lounge was modeled after USO lounges and day rooms used by the military.

“The most perfect thing in the world in my line of work is connecting one veteran with another that didn’t previously know each other. And in this space, veterans will see and meet other veterans,” said Gordon, director of the Veteran and Military Center.

Gordon said none of this would have been possible if it weren’t for two students who started a petition for a better, more appropriate space for veteran and military students.

“Our main focus was to get a one-stop shop for veterans to deal with their benefits, a place to relax, a place to get away from the crowds, a place that was for us,” said Anthony Hinojosa, a senior who helped start the petition and also served 10 years in the Navy supporting Navy Special Warfare Operations.

“I believe Wright State is the best place for veteran and military students. The faculty have always been helpful and understanding. The benefits processing and support here has been streamlined and is just top notch. And now we have this beautiful space.” 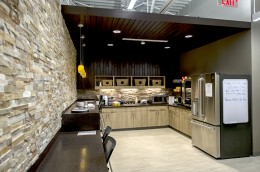 Complimentary coffee, water and refrigeration are available to students in the kitchenette.

The university offers an array of resources to help those students transition to campus and was recently praised by an independent auditor of military benefits processing as being “the best of the big schools.” Wright State awards educational credits for military training and experience and has designed courses open only to veteran and military students. It also delivers high-quality career services to best express military experience and helps veterans connect with other students through campus events and student clubs.

Wright State is engaged in a $150 million fundraising campaign that promises to further elevate the school’s prominence by expanding scholarships, attracting more top-flight faculty and supporting construction of state-of-the-art facilities. Led by Academy Award-winning actor Tom Hanks and Amanda Wright Lane, great grandniece of university namesakes Wilbur and Orville Wright, more than $107 million has been raised so far. Both are outspoken supporters of veterans and military service men and women.

Amanda Watkins, associate director of the VMC, has been attached to the center since 2006. She believes the new space is a reflection of the culture and commitment to veterans that she and others have exemplified through the years at Wright State.

“My brother graduated from Wright State on the G.I. Bill, and I try and see every student that walks in here needing help with benefits or anything else like my brother and how I would want him treated. I think that’s the attitude that’s made Wright State legitimately military friendly,” said Watkins.

The average age of a veteran student at Wright State is 30. They epitomize the term nontraditional and require unique support because of their unique experiences.

“One percent of the U.S. population serves in the armed forces and a fraction of that percentage serve in combat. This is a population that is trained to be selfless and can distrust large bureaucracies,” said Gordon. “They must be treated differently than the average teenage freshman for them to succeed.”

Gordon said his goal was to create a sense of belonging, a space that would make veteran and military students feel like “they want me here.”

“This is one of the best facilities in Ohio hands down. But this is not only about the space. Our resources coupled with this space easily put us up with the front of the pack in Ohio in regards to serving veteran and military students,” said Gordon.

“I’d like Wright State to be a model for how you support this population,” said Gordon. “We can be the leader who leads by actions and not just talking about it. This new center will be a vessel for many great things that will happen here.”