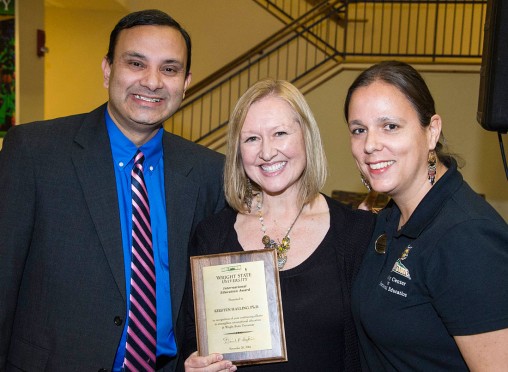 Associate French professor Kirsten Halling, who has helped spur the dramatic growth of Wright State’s French program, led the wildly popular French Immersion Days and nurtured an appreciation of France in the community, was named recipient of the university’s 2014 International Education Award.

“Kirsten’s advocacy for expanding global awareness and international understanding has opened and deepened the lives of those she touches,” said Marie Hertzler, chair of the Department of Modern Languages.

In the 14 years Halling has worked at Wright State, the French program has grown from one major and two minors to 45 majors and 45 minors. And in 2012 the program contributed its first Wright State Presidential Scholar, which recognizes one outstanding student with a minimum cumulative grade point average of 3.8.

Since 2003, Halling has directed or co-directed the French Immersion Ambassador Programs, which involves an annual pilgrimage to Paris.

“Every year 20 students learn to know the beauty and grit of this city and hone their French language skills,” said Hertzler, adding that Halling would trek up the Eiffel Tower to get the special Tour Eiffel postmark on the students’ postcards.

Halling has served as adviser to the French Club and Department of Modern Languages, moderator for the French Honor Society, mentor to the French adjunct professors and advocate for study abroad.

She has made twice-annual presentations at regional and national conferences on the diversity of contemporary French and Francophone music, held a weekly French Conversation Hour and encouraged students to find French cultural activities in the community through membership in Sister Cities International, excursions to French museum collections and restaurants.

Halling said the recent focus of the program has been to provide students with real-life opportunities to practice their French through service-learning projects in the Dayton immigrant community, by teaching French at an elementary school and through an internship in Bordeaux, France, teaching courses on American culture in an at-risk high school.

“Students need to know that as one of the fastest-growing languages in the world, French opens their horizons to many different cultural, social and professional opportunities,” she said.