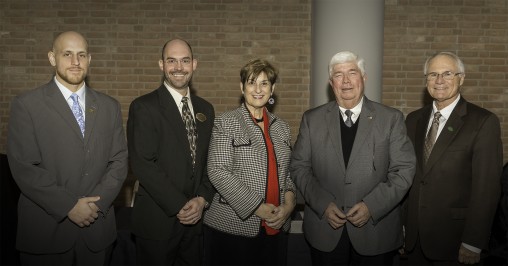 Making one of the largest alumni gifts in the history of the university, Wright State graduate Ron Bullock has pledged $3 million to the College of Engineering and Computer Science. Bullock’s gift will help fund the college’s initiatives in engineering design and innovation.

“The Bison Gear & Engineering Innopreneurship Laboratory will play a vital role in the education of Wright State’s engineering students,” said Nathan Klingbeil, dean of the College of Engineering and Computer Science. “This cutting-edge facility will bridge the gap between classroom theory and true engineering practice, providing students with both the creative space and the state-of-the-art technology required to take their ideas from concept to market.” 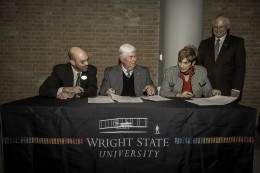 “This is an opportunity for students to take innovative design ideas and then actually produce them in a lab,” said Bullock. “I hope it will provide an incubator capability for new business and entrepreneurship, or what we call ‘innopreneurship’ at our company.”

A portion of Bullock’s gift will also be set aside to establish the Ronald D. Bullock Endowed Professorship in Engineering Design and Innovation. This new faculty position will help attract a renowned scholar in the field of engineering design and innovation to Wright State.

“The Ronald D. Bullock Endowed Professorship in Engineering Design and Innovation will foster internationally recognized research and graduate programs in engineering design and innovation, linking the output to regional and national workforce development in design and manufacturing,” Klingbeil said.

Bullock has also set aside a portion of his estate as a bequest, upon his death, for the ongoing support of the Bison Gear & Engineering Innopreneurship Laboratory.

“Ron’s gift will impact Wright State’s students for generations to come,” said Rebecca Cole, vice president for advancement and president of the Wright State University Foundation. “By giving our students first-hand experience in developing new products and technologies, we are creating the innovators and entrepreneurs of tomorrow.”

Cole added that Bullock has made the largest alumni gift to date to Rise. Shine. The Campaign for Wright State University. With a fundraising goal of $150 million, the Rise. Shine. Campaign promises to further elevate the university’s prominence by expanding scholarships, attracting more top-flight faculty and supporting construction of state-of-the-art facilities. Led by Academy Award-winning actor Tom Hanks and Amanda Wright Lane, great grandniece of university namesakes Wilbur and Orville Wright, the campaign has raised more than $108 million so far.

Bullock joins nine other Wright State alumni who have each pledged $1 million or more to the Rise. Shine. Campaign.

“The overwhelming response by our alumni to this campaign speaks volumes to the quality of education Wright State provides,” said Cole. “Our graduates want to ensure that future generations of Wright State students receive the same opportunities they did to rise, to shine.”