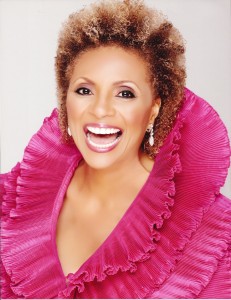 Actress and singer Leslie Uggams will work firsthand with Wright State students and perform for the public in concert as a visiting artist of the university’s Musical Theatre Initiative.

Her amazing career spans the last 60 years of musical theater. She has won Tony and Emmy Awards; performed on Broadway, TV and in films; and released numerous solo albums.

And later this month, actress and singer Leslie Uggams will visit Wright State University to work firsthand with students and perform for the public in concert at the Victoria Theatre.

“She represents so much of the history of popular entertainment in the last half of the 20th century and into the 21st,” said Joe Deer, distinguished professor of musical theatre and director of the Musical Theatre Initiative at Wright State.

Uggams is the first major visiting artist brought to campus by the Musical Theatre Initiative, a new entity on campus that celebrates and explores the history, culture and craft of the musical theatre through guest artist residencies, concert performances and international conferences.

During her visit to campus Thursday, Jan. 22, Uggams will lead master classes with acting and musical theatre students from 10 a.m. to noon in the Herbst Theatre in the Creative Arts Center. The classes are open to the public.

The master classes will be followed at 1 p.m. by a question-and-answer session led by Deer with students from around campus.

Later in the day, Uggams will work privately with a select group of musical theatre students who will perform with her at the Victoria the following night. 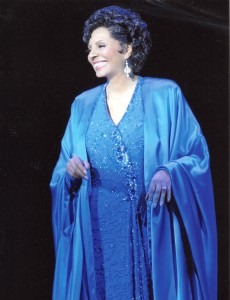 Leslie Uggams will lead master classes with performing arts students, work privately with a select group of musical theatre students and perform in concert during her visit.

Uggams will sing classic and contemporary standards on Friday, Jan. 23, at 8 p.m. at the Victoria Theatre in downtown Dayton.

The concert is presented by the Musical Theater Initiative at Wright State and the Victoria Theatre Association.

Deer, who worked with Uggams about 25 years ago on Broadway and on the national tour of “Anything Goes,” said exposing students, as well as faculty, to a successful artist like Uggams is inspiring.

“Students don’t just need rigor and discipline and opportunities, they need inspiration,” he said. “To have contact with a person like Leslie, it’s like an infusion of energy for all of us.”

He said Uggams is an ideal performer to serve as the first Musical Theatre Initiative’s visiting artist.

“She really runs the gamut from silly, variety show entertainment to very serious drama,” he said. “The best thing that we do is bring our students into contact with amazing artists, thinkers, teachers, and give them a chance to really apply what they learn from those folks.”

Uggams may be best known for her portrayal of Kizzy in the 1977 landmark TV miniseries “Roots,” for which she earned an Emmy nomination.

Uggams is currently touring nationally with her autobiographical one-woman musical “Uptown/Downtown.” She recently starred in “Pipe Dream” at New York City Center and in the Broadway-bound premiere of “Stormy Weather: The Lena Horne Story” at the Pasadena Playhouse in California. 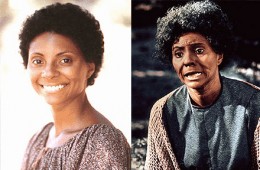 Uggams may be best known for her portrayal of Kizzy in the TV miniseries “Roots,” for which she earned an Emmy nomination.

After visiting Wright State, she will begin rehearsing for the new Broadway musical “Midnight in the Garden of Good and Evil.”

Her first professional appearances came as a child opening for such musical legends as Louis Armstrong, Ella Fitzgerald and Dinah Washington at the Apollo Theater. She is now on the Apollo Theater board of directors and was recently honored with the American Artist Award at Arena Stage in Washington, D.C.

Uggams made her Broadway debut in 1967 when she starred in “Hallelujah, Baby!” earning both Tony and Theater World Awards. Since then she has performed in “Blues in the Night,” “Her First Roman” with Richard Kiley, “Jerry’s Girls,” “Anything Goes,” “King Headley II,” “Thoroughly Modern Millie” and most recently “On Golden Pond” opposite James Earl Jones.

As a regular on “Sing Along with Mitch” she was the first African-American performer to be featured on a weekly national primetime television series. In 1970 she hosted her own primetime variety series, “The Leslie Uggams Show.” She has also appeared on “Backstairs at the White House,” “Christmas at Radio City Music Hall,” “Fantasy,” “All My Children” and “The Good Wife.”

She has released more than 10 albums, including latest, “On My Way to You: The Songs of Marilyn and Alan Bergman” and “Leslie Uggams: Uptown/Downtown.”

Uggams is the latest in an all-star lineup of performers who have visited Wright State to work with students. In 2013 renowned Broadway composer Stephen Schwartz worked with students and performed in concert as part of the Distinguished Visiting Artist Series, sponsored by Wright State’s Ohio Center of Excellence in Collaborative Education, Leadership and Innovation in the Arts (CELIA).

This March, Keith Lockhart, conductor of the Boston Pops and the BBC Concert Orchestra, will spend a week working with students at Wright State and serve as guest conductor for two special performances, with the Dayton Philharmonic Orchestra and Chorus, of Benjamin Britten’s “War Requiem.”