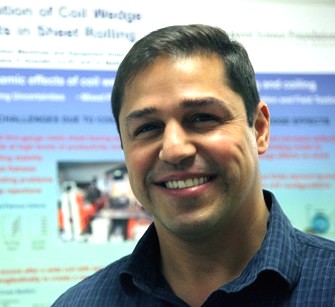 Arif S. Malik, who obtained his B.S., M.S. and Ph.D. in engineering from Wright State, is an assistant professor at the Saint Louis University Parks College of Engineering, Aviation and Technology.

Malik, who is currently an assistant professor at the Saint Louis University Parks College of Engineering, Aviation and Technology, also obtained his bachelor’s and master’s degrees in engineering from Wright State, in 1994 and 2001 respectively.

The foundation award honors those who are most likely to become leaders of academic research and education in the 21st century. It recognizes junior faculty who exemplify the role of teacher-scholars through outstanding research, excellent education and the integration of education and research within the context of the mission of their organizations.

Prior to joining the faculty at Saint Louis in 2009, Malik was a research assistant professor of mechanical engineering at Wright State, specializing in simulation and optimization of rolling-mill machinery using custom finite element techniques.

For his Ph.D. research, Malik collaborated with steel producers and received a patent for his work along with Grandhi, his former mentor and director of the engineering Ph.D. program.

Grandhi said Malik writes outstanding technical proposals addressing precisely what the sponsor wants. While at Wright State, Malik extensively participated in Third Frontier proposals and helped the university’s team be well represented at the state level and rank high in the peer-review process.

“Arif is persistent and stays focused on the concept,” Grandhi said. “He has an excellent work ethic.”

During his time as a research assistant professor at Wright State, Malik was instrumental in the formation of CEPRO, the Ohio Center of Excellence for Product Reliability and Optimization, and has continued to collaborate on projects through CEPRO.

Malik said Wright State gave him the tools to succeed in industry and academia.

“Wright State’s College of Engineering and Computer Science has some outstanding faculty — including great teachers like Nathan Klingbeil, engineering dean, and great mentors like Ramana Grandhi, who challenged me to go beyond expectations as a Ph.D. student,” Malik said. “These and other Wright State faculty really helped prepare me for success in attaining this National Science Foundation award.”

At Saint Louis, Malik brought his experience in industrial research, applications engineering and business to the classroom, where he helps students understand and solve practical engineering problems.