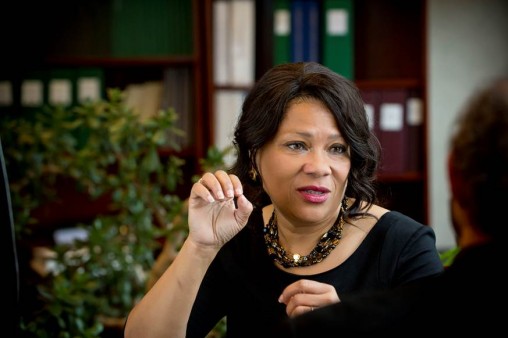 Rountree, J.D., most recently served as assistant director of affirmative action at Wright State before being named to head the university’s Office of Ombuds.

Recognizing her lifelong commitment to community service and her leadership of others and the organizations she serves, Wright State University’s Hazel Rountree was awarded the Southern Christian Leadership Conference’s Dr. Martin Luther King Jr. Legacy Award for “leadership development, structure and strategies for achievement for the advancement of others as well as organizations.”

“I am absolutely elated by this award because it recognized my service to the community, an important value to me,” said Rountree, J.D., Ph.D., who is Wright State’s university ombudsperson.

“I want to be a point of contact for anyone — students, faculty or staff — to discuss issues and get them to the place they need to be,” Rountree said about her current role at Wright State. “The second part is to be proactive and identify patterns and trends that help employees.”

Rountree is no stranger to being in a leadership role. After her family moved to Dayton from Buffalo, N.Y., when she was 11, Rountree was quickly identified by her schoolteachers as a leader who cared about others. She was put in charge of helping blind students get off the bus in the mornings and get settled in for their breakfast.

At the end of each school year, Rountree would ask custodians to give her old blackboards and other school equipment headed for the dumpster and use it to set up a classroom on her front porch, where she would teach her siblings and neighborhood kids how to read.

By the seventh grade, she was running her own summer camps for kids in the inner-city west Dayton neighborhood, where finding constructive things to do in the summertime could be a challenge.

Rountree became interested in law at an early age. Her parents nicknamed her “the attorney” for her ability to mediate family issues among her 10 brothers and sisters.

When having only one telephone in the house began to spark sibling battles, she set up a schedule designating telephone time for everyone.

Rountree went on to get her law degree at the University of Dayton, served as a law clerk for the Legal Aid Society of Dayton and Dayton Public Schools and a civil-rights intern for the City of Dayton. She also spent 14 years at Sinclair Community College, six of them as director of student activities.

In addition, Rountree is founder and president/CEO of the Wright Computer Connection, a nonprofit dedicated to bridging the digital divide by providing computer technology to the underprivileged. She set up computer labs at community centers, teen clubs and even violence-plagued public housing with clusters of donated computers.

As ombudsperson, Rountree is available to every unit on campus and is proactive in listening to concerns and helping to resolve any conflicts, ensuring that things are done justly and fairly. She says she ensures that all parties are treated with respect.

Rountree also is a member of the Dayton School Board. In that role she is a front door to the community and serves as a touch point to ensure that Wright State continues to have a strong relationship with community organizations and businesses.

Rountree also works closely with Wright State’s Department of Human Resources, Office of Equity and Inclusion and other units to review Wright Way policies and training programs to ensure they are complete, consistent and up to date.